It's too early to know how much the blaze might delay efforts to remove the partly submerged shipwreck that remains off the Georgia coast. 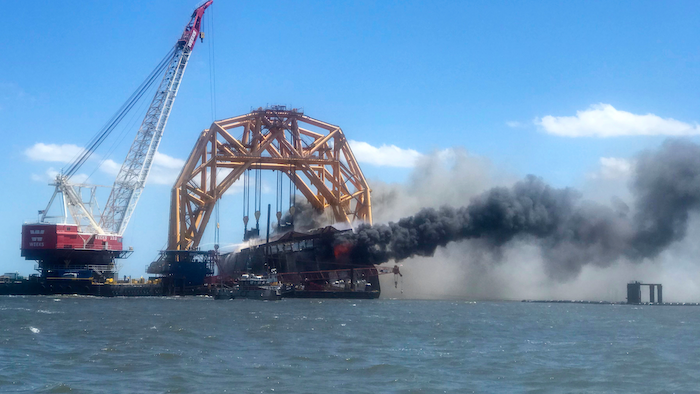 SAVANNAH, Ga. (AP) — The remains of an overturned cargo ship being dismantled along the Georgia coast caught fire Friday as workers used torches to cut into the hull, sending up black smoke and causing loud bangs that sounded like explosions.

The multiagency command overseeing demolition of the Golden Ray said in a statement late Friday that crews had put out the fire, which burned for several hours, and would remain on the scene overnight in case the blaze flared up again.

Susan Inman of the Altamaha Riverkeeper conservation group told The Associated Press she could see flames shooting from the open ends and the top of the Golden Ray on Friday afternoon as she watched from a boat about 300 yards (275 meters) away near St. Simons Island. She also heard several loud popping sounds from the shipwreck.

Several hours later, the fire was being sprayed with hoses from the towering crane being used to dismantle the ship as well as at least two boats equipped with water cannons. "It's kind of like a roller coaster where it seems to die down for about 20 minutes or half an hour, and then it picks back up again," Inman said.

No injuries were reported and all demolition crew members near the shipwreck were safely evacuated, said Coast Guard Petty Officer 2nd Class Michael Himes, a spokesman for the multiagency command in charge of the demolition.

Himes said it was too early to know how much the blaze might further delay efforts to remove roughly one-half of the shipwreck that remains partly submerged in St. Simons Sound. Once it's safe for workers to return to the wreck, he said, an engineering analysis will be performed to determine the extent of the fire damage.

The South Korean-owned Golden Ray measured 656 feet (199 meters) long when it overturned on Sept. 8, 2019. A towering crane that straddles the wreck is cutting the ship into giant chunks using 400 feet (122 meters) of anchor chain to tear through the hull like a blunt-edged saw.

An active 2020 hurricane season and the coronavirus pandemic kept demolition from starting until November. Though the job reached the halfway mark in April, progress has been slower than initially expected. Himes said flames flared up inside the wreck Friday afternoon as workers used torches to make cuts along the ship's hull to serve as a guide path for the cutting chain.

"It is considerable at this time. It picked up very quickly," Himes said of the blaze. "The good news is, because we planned for fires and we planned for the need to evacuate in the case of those fires, all of our crews are accounted for." Himes said the fire was likely sparked by one of the cutting torches, even though crews were pumping sea water onto the ship as a fire suppression measure. He didn't know what was fueling the blaze, but said it's possibly residual fuel still aboard the ship as well as cars that remain inside its cargo decks.

The Golden Ray had roughly 4,200 vehicles in its cargo decks when it rolled onto its side shortly after leaving the nearby Port of Brunswick. Though four crew members had to be rescued from deep inside the ship, all 24 people on board survived.

A Coast Guard expert concluded the Golden Ray tipped over because unstable loading had left its center of gravity too high. Lt. Ian Oviatt testified at a hearing on the wreck last year that the ship lacked enough water in its ballast tanks, used to add weight at the bottom of a vessel, to offset that of the vehicles in its cargo decks above.

Power failures in Medtronic's Heartware assist device are tied to cases of stroke and more than a dozen deaths.
Jun 4th, 2021
Follow Us
Most Recent