A leak developed at the site this month, creating fears of a collapse that lead to the evacuation of more than 300 homes, businesses and farms. 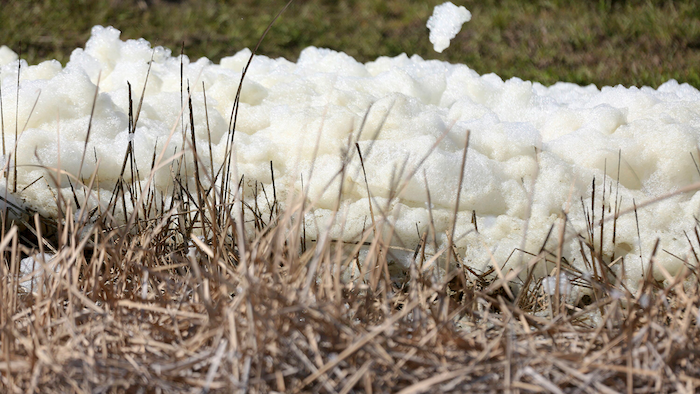 An unidentified foam collects on reeds where effluent flows from a pipe into a drainage ditch at Port Manatee South Gate on Tuesday, April 6, 2021, in Palmetto, FL.
Douglas R. Clifford/Tampa Bay Times via AP

The Republican governor said at a news conference at the site that the chronic challenges of containing polluted water at the long-closed phosphate plant must end. "We want this to be the last chapter of the Piney Point story," DeSantis said. The reservoir is located just south of Tampa in Manatee County, near waterways that flow into Tampa Bay.

The governor said he has directed the Department of Environmental Protection to develop a closure plan, and that $15.4 million in existing agency funds would be used to treat the wastewater to reduce the nutrients that can cause algae blooms and fish kills. When a leak developed at the site this month, in a reservoir that once held 480 million gallons (1.9 million liters), experts fearing a collapse triggered the evacuation of more than 300 homes, businesses and farms in the area.

The worst was avoided as engineers rushed in vacuum trucks and other equipment to furiously pump out wastewater, relieving the pressure. Crews also installed a steel plate at the leak site to prevent additional flooding from a seam in the reservoir's plastic liner. The reservoir contains what are called phosphogypsum stacks, a leftover from the phosphate mined for fertilizer. Officials say the water contains nitrogen, phosphorus, ammonia, and small amounts of radium and uranium, but is not radioactive.

There are about two dozen other similar phosphate wastewater reservoirs in Florida, according to the U.S. Environmental Protection Agency. They hold about one billion tons of phosphogypsum stacks similar to those at Piney Point. The EPA also says about 90 percent of the nation's phosphate is mined in Florida, North Carolina and Tennessee.

In Florida, the other phosphogypsum stacks have — so far — not had the same massive leak problems as Piney Point and there are no plans to close them, according to the state Department of Environmental Protection. However, a Mosaic phosphate plant leaked millions of gallons of wastewater into Florida's underground aquifer after a sinkhole opened up in 2016 beneath a reservoir holding phosphogypsum stacks. Another Mosaic leak happened at a different plant in 2019, but officials said it was largely contained.

Noah Valenstein, the Florida DEP secretary, said the state also plans to sue HRK Holdings, which bought the Piney Point property in 2006 and promised a cleanup. Instead, the company filed for bankruptcy following a 2011 spill of 170 million gallons. "Stay tuned for litigation," Valenstein said. "This is it. The site has to be closed."

Wilton Simpson, the Republican president of the Florida Senate, said lawmakers would work to fully fund the cleanup and closure of Piney Point. The Legislature is currently in session. "By the end of session, we'll have a closure plan," Simpson said.