Heaslip Engineering LLC was cited for a multiple “serious” violations and one labeled “willful.” 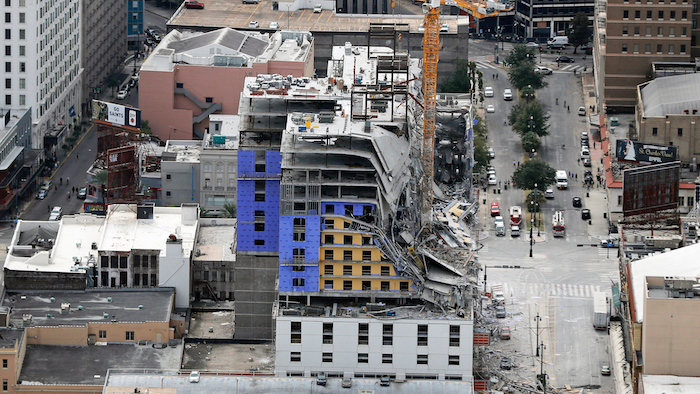 This Saturday, Oct. 12, 2019 file photo shows the Hard Rock Hotel, which was under construction, after a fatal partial collapse in New Orleans.
Associated Press

NEW ORLEANS (AP) — A federal agency has issued citations against a dozen companies in connection with last fall’s deadly partial collapse of a hotel under construction in New Orleans.

They include an engineering firm charged with a “willful” violation involving the design and approval of steel bolt connections that affected the structural integrity of the structure.

The Occupational Safety and Health Administration also cited a steel contractor for “failing to maintain structural stability of the building,” according to a news release posted on the OSHA website Friday.

Heaslip Engineering LLC was cited for a multiple “serious” violations and one labeled “willful.”

“Structural steel connections were inadequately designed, reviewed or approved, affecting the structural integrity of the connections,” the citation said.

“We believe OSHA’s conclusions are unwarranted, not supported by the facts and beyond the jurisdiction of OSHA’s statutory authority. Heaslip unequivocally denies any “willful” or “serious” wrongdoing," Theard's statement said.

Among OSHA allegations against Suncoast Projects LLC, which does business as Hub Steel, was a citation stating that “steel beams on the sixteenth floor were not connected to columns on the fifteenth floor” as called for in contract documents.

The company did not immediately respond to an emailed request for comment Friday afternoon.

Ten other companies are cited for various safety violations, including failure to provide proper stairways and exits.