Vital but Vulnerable, Cleaners Hold the Line Against a Virus

The unsung people doing all this cleaning earn low wages, frequently lack sick leave and paid days off and can be fired with no warning. 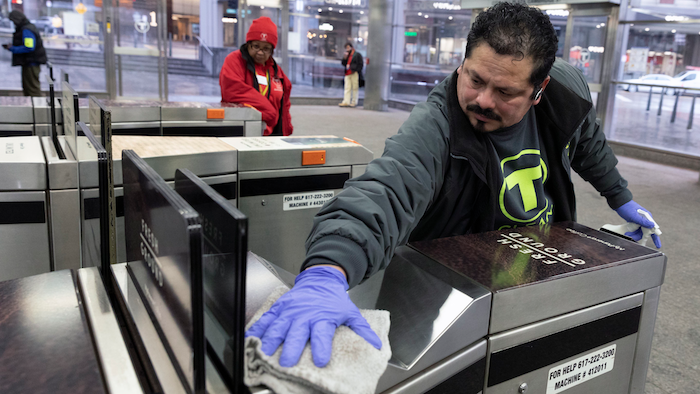 In this March 13 photo, a worker disinfects a turnstile at the Government Center transit stop, in Boston. As the global viral pandemic grows, the need for cleaning and disinfecting has surged. Cleaners and domestic workers are essential in the effort to contain the virus.
AP Photo/Michael Dwyer, File

NEW YORK (AP) — When hospitals need to prep a room for the next coronavirus test, when jetliners discharge their passengers at the gate, when suburbanites start to take sanitary precautions more seriously, the call goes out:

Send in the cleaners.

These largely unsung workers are often the first line of defense against the global COVID-19 pandemic, cleaning and disinfecting homes, offices, medical facilities and public spaces where the novel coronavirus could spread. But the people doing all this cleaning earn low wages, frequently lack sick leave and paid days off, and can be fired with no warning.

Amid all that is the constant fear that they could encounter the virus themselves, despite what many say are diligent precautions.

Shasmin Lewis, who spends her mornings doing office work for MaidPro in Philadelphia and her afternoons cleaning homes, says her hours have jumped almost 80% to 40 hours a week. She brings her own mask to work even though MaidPro provides both masks and gloves, washes her hands frequently and wears gloves even when dusting.

“I’m very worried, but I plan on staying around until we can’t,” she said. Not only do her elderly customers need her help, she says, but like countless workers, she has enough savings to support her and two kids for about a month — even though she's moving into management.

For most people, the coronavirus causes only mild or moderate symptoms, such as fever and cough. For some, especially older adults and people with existing health problems, it can cause more severe illness, including pneumonia. The vast majority of people who contract the virus recover.

Overall demand for cleaning has been heavy. Airlines, including Delta and Southwest, added disinfecting measures on flights. Amtrak increased the frequency of cleaning services at trains and stations, in some cases on an hourly basis, and is using more disinfectant to wipe down handrails, door knobs and handles.

During the first two weeks of March, ads for cleaners were up 75% in the U.S. and 20% in the U.K. compared to a year ago, according to Ziprecruiter, an online job posting site.

But that’s starting to change as cities across the U.S. and Europe enter lockdown and schools, hotels, restaurants and other businesses shut down.

Last week, Zoraida Rodriguez was working overtime to keep the Bernard B. Jacobs theater clean for well-heeled Broadway enthusiasts. She and other custodial workers were called in early and stayed late to help with deep cleaning, disinfecting door knobs, stair rails and anything else theatergoers might touch.

This week, Rodriguez is out of a job. Broadway theaters abruptly closed until at least April 12 and possibly beyond. At least 204 theaters and stadium service workers lost their jobs, according to the Service Employees International Union that represents them. There is no clear answer about whether they would get severance pay or any type of relief. Rodriguez was told to pick up her last paycheck this week.

Rodriguez, 53, has worked cleaning Broadway theaters for nearly 16 years, making $20 an hour. She had health insurance, paid sick leave and vacation. Those benefits are gone, although SEIU is negotiating for some relief. For the moment, she says she’ll rely on unemployment benefits and her daughter’s salary from a New Jersey beauty salon -- although salon hours are also falling as customer traffic plummets.

“We really live paycheck to paycheck, and it is difficult for us to last a month without working,” Rodriguez says.

According to a study by the National Domestic Workers Alliance, 82 % of domestic workers don’t get paid sick days. Many are afraid if they do stay out sick they’ll get fired: about 25% of domestic workers fired from their jobs say it was due to their request to take time off, 22% were fired for actually taking time off, and 20% were discharged for missing work to take care of themselves or a family members.

The mean annual wage for maids and housekeepers was $25,570 in 2018, according to the most recent data from the Bureau of Labor Statistics. For janitors and building cleaners it is $26,100 per year. That’s close to the poverty line for a family of four.

Technology is also encroaching on their jobs. Hong Kong’s subway operator is deploying 20 robots developed with a local biotech startup that spray vapourized hydrogen peroxide to “penetrate in the small gaps that are difficult to reach during normal cleaning work” on train cars or station facilities. The Westin Houston Medical Center is rolling out two ultraviolet “germ-zapping robots” to disinfect rooms, saying it’s the first and only U.S. hotel to do so.

Ingrid Vaca, who works cleaning homes in the Washington, D.C. area, has lost four of her eight clients over the past two weeks as the coronavirus crisis deepened. One by one, they have called to tell her not to come, trying to keep their homes closed off to the outside world. Only one offered to pay her for the month of March.

This crisis has magnified the dangers of Vaca’s precarious work life, which has long been at the mercy of employers who can fire her at any moment, for any reason, with no obligation to give her notice or severance pay.

One client, an elderly man whose house she has cleaned for 15 years, abruptly laid her off on Friday after his family decided he could no longer afford her services. No one asked how she was faring in the midst of the pandemic that had cost her three other jobs the same week.

“They throw us out like a dirty towel when they don’t need us anymore,” said Vaca, 57, sobbing as she recalled her years of service to the client, whose son lives in another state. “We are people too with families with needs.”

Demand still remains strong in one area of the economy: healthcare.

Alex Lawrence, co-owner of a British cleaning company, said requests have soared since the outbreak began. His company, Lawrence Cleaning, has contracts with 21 clinics in central England, which under new U.K. regulations will need daily cleaning of certain “red zones.”

Lawrence, who works alongside his staff on medical cleaning jobs, said they clean anything that gets touched -- doors, desks, handrails, armrests. They wear full "personal protection equipment” -- respirators, suits, gloves and foot covers.

“It can look quite daunting if people are in full suits and masks and (patients) think they could be in danger,” said Lawrence. “But it does look less daunting if we're around when people aren't in.”