The Coronavirus that began last month in the Chinese City of Wuhan has now claimed 26 lives and sickened another 830. Here's where things stand as of Friday morning. 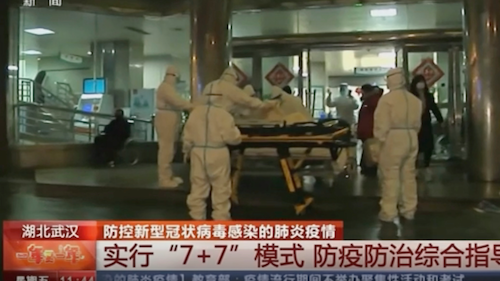 In this Thursday, Jan. 23 image from China's CCTV video, a patient is carried on a stretcher to an ambulance by medical workers in protective suits in Wuhan, China. China is swiftly building a hospital dedicated to treating patients infected with a new virus that sickened hundreds and prompted unprecedented lockdowns of cities home to millions of people during the country's most important holiday.
CCTV via AP

Hundreds of cases of a new viral respiratory illness have been confirmed in China and elsewhere since an outbreak began last month in the Chinese city of Wuhan. Scientists have identified the illness as a new kind of coronavirus. Coronaviruses are a large family of viruses, some of which cause the common cold. Others have evolved into more severe illnesses, such as SARS and MERS, although so far the new virus does not appear to be nearly as deadly or contagious.

— The number of confirmed cases rose to 830. Twenty-six people have died, including the first two deaths outside Hubei.

— After Wuhan halted all outbound flights, trains, buses and ferries on Thursday, 12 other cities in the central province of Hubei followed suit, with a combined population of more than 36 million now under lockdown.

— Wuhan is swiftly building a 1,000-bed hospital dedicated to the disease. The prefabricated structure, slated for completion Feb. 3, is modeled after the Xiaotangshan SARS hospital in Beijing. The SARS hospital was built from scratch in 2003 and featured individual isolation units that looked like rows of tiny cabins.

—- The new virus claimed its youngest victim. A 36-year-old man in Hubei was admitted to the hospital earlier this month after suffering from fever for three days. He died following a sudden cardiac arrest on Jan. 23.

— South Korea and Japan both detected their second cases, and Singapore two more for a total of three.

— Hospitals in Wuhan are grappling with a flood of patients and a lack of supplies. At least eight hospitals in Wuhan issued public calls for donations of masks, goggles, gowns and other protective medical gear, according to notices online.

The woman in her 60s returned from China on Jan. 13 without showing any signs of illness, but a few days later she called her doctor to report feeling sick.

The patient is doing well and remains hospitalized “primarily for infection control,” said Dr. Allison Arwady, Chicago's public health commissioner. People that the women had close contact with are being monitored.

Earlier this week, a man in Washington state was diagnosed with the virus after returning from a trip to China.

Dr. Nancy Messonnier of the Centers for Disease Control and Prevention said the risk to the U.S. public remains low but that it's likely more cases will be diagnosed in the coming days, as the virus appears to have a two-week incubation period.

Nationally, over 2,000 returning travelers had been screened at U.S. airports and 63 patients in 22 states were being tested, although 11 of them so far have been found free of the virus, the CDC said.

US Workplaces Ill-Equipped to Contain a Virus

Do workplace norms and policies help companies cope with a contagious virus, or do they accelerate its spread?
Karen Scott
Feb 5th, 2020

The company describes the toothpicks as a breath-freshener that can provide “nicotine satisfaction without smoke damage.”
Feb 3rd, 2020