PG&E needs to quickly overhaul its plan in time to meet a make-or-break deadline for getting out of bankruptcy. 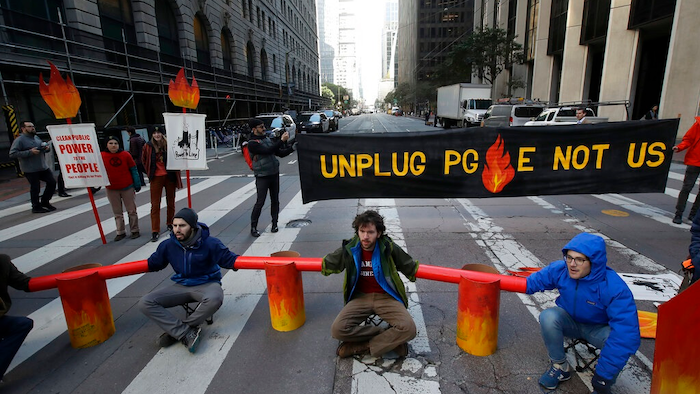 Protesters block traffic on Beale Street where a Pacific Gas & Electric building is located in San Francisco, Monday, Dec. 16, 2019. Pacific Gas & Electric will have to quickly reshuffle its board of directors and redraw a complex plan addressing more than $50 billion in potential wildfire claims to gain Gov. Gavin Newsom's support in time to meet a fast-approaching deadline to emerge from bankruptcy protection.
AP Photo/Jeff Chiu

SAN FRANCISCO (AP) — Pacific Gas & Electric Co. will have to quickly overhaul a complex plan addressing more than $50 billion in wildfire claims to gain California Gov. Gavin Newsom's support in time to meet a make-or-break deadline for getting out of bankruptcy.

That sobering reality hit PG&E late Friday when Newsom rejected the company's overhauled restructuring plan, including a $13.5 billion deal between the nation's largest utility and attorneys representing people who lost their homes, businesses and relatives in a series of catastrophic fires blamed on the utility in 2017 and 2018.

The $13.5 billion settlement was supposed to resolve more than $36 billion in claims from those victims. It came after PG&E struck a separate $11 billion deal with insurers who already paid out billions in losses to their policyholders for the same fires.

Those two settlements form the foundation of a plan now in jeopardy of crumbling unless PG&E can placate Newsom. The Democratic governor's approval is needed for the utility to be able to draw on a special fund lawmakers approved last summer to protect California utilities from future wildfire losses as climate change makes them more frequent and destructive.

The company's bankruptcy plan must be approved by the state and a federal judge by June 30 to qualify for the wildfire fund.

Newsom “has all the leverage now, and he is obviously using it,” said Christopher Muir, an analyst with CFRA Research.

PG&E has until Tuesday to submit a revised solution to Newsom. In a statement, the company said it believes its plan complies with California laws and pledged to work diligently to resolve any misgivings.

No matter what happens next, many of the utility's 16 million customers are fed up. The backlash primarily stems from wildfires that killed nearly 130 people and destroyed about 28,000 structures, and the company's decision this fall to deliberately turn off power to millions of customers to reduce fire risks in extremely windy and dry conditions.

A group of protesters vented their frustration in demonstrations Monday outside PG&E's San Francisco headquarters.

Although he didn't spell out all the changes he wanted in a letter to PG&E, Newsom left no doubt that he expects the company to replace all 14 members of its board of directors.

That demand comes despite PG&E having ushered in 12 new board members in the past nine months. Newsom wants the company's board to have more directors from California with more experience running a safe business, something the governor and other critics say PG&E hasn't been doing in the past decade.

Finding new board members more palatable to Newsom figures to be easier than coming up with a financial plan that can pay off all the claims and persuade the governor that the utility will still have enough money to invest in the upgrades needed to make its transmission lines safer and more reliable.

To pull it off, PG&E will likely have to sell more stock to raise billions more than its plan now envisions, predicted Muir, the CFRA analyst. If the company resorts to that strategy, the additional stock sales will have the effect of reducing PG&E's earnings per share — a key metric used by investors to estimate a company's value.

The company's existing proposal relies on giving fire victims $6.75 billion in stock that would give them a nearly 21% stake in the utility.

As expected, Newsom's resistance to PG&E's existing plan spooked investors, sending its shares plummeting 14% Monday to close at $9.67. That's still above the sub-$8 level where the shares were stuck late last month before news reports and confirmation of PG&E's settlement with the uninsured and underinsured fire victims fueled hopes the company had finally found a clear path out of bankruptcy.

If PG&E can't appease Newsom, it could give new life to an alternative plan submitted by group of bondholders led by Elliott Management and Pacific Investment Management that would provide the utility with about $20 billion in cash in exchange for most of its stock.

The bondholder group seized on Newsom's rejection in a Monday court filing that hailed its proposal as the most viable option. The bondholders also asked the judge to remove a provision in PG&E's settlement with the fire victims that requires them to support the company's preferred plan.

EXAIR’s HazLoc Cabinet Cooler Systems have been tested by UL and meet the stringent UL requirements for these areas.
Jul 26th, 2021

Managed retreat is an opportunity to preserve the essential while redesigning high-risk areas in ways that are better for everyone.
Jul 26th, 2021

No injuries were reported.
Jul 22nd, 2021
Follow Us
Most Recent