The head of a southern Wisconsin milling and ethanol company where five people were killed in an explosion says it will be rebuilt with the best available technology for safety and efficiency. 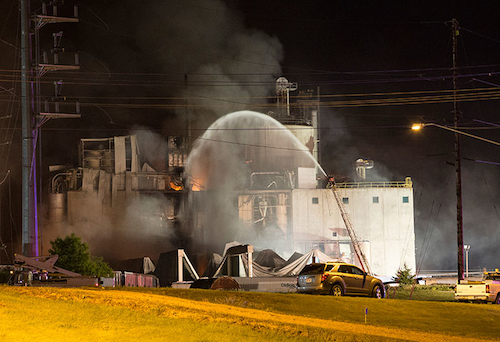 CAMBRIA, WI — The head of a southern Wisconsin milling and ethanol company where five people were killed in an explosion says it will be rebuilt with the best available technology for safety and efficiency.

Didion Milling CEO John Didion told the Cambria Village Board on Monday night that the milling facility, which was severely damaged in the May 31 explosion, will be torn down starting next week. He says work at the company's nearby ethanol plant can resume not long after that's done.

In the meantime, Didion says he's been reaching out to local employers to try to find work for his displaced workers while he pays their wages until he can call them back to work.

Interested parties are free to use the files to reproduce and even sell the ventilators.
Unit 202 Productions
David Mantey
Apr 1st, 2020

Concerns about the stockpile levels were first reported by the Washington Post on Wednesday.
Associated Press
Apr 1st, 2020