Criminal charges against two cantaloupe farmers over a deadly foodborne illness sent an emphatic message to growers to crack down on safety. The criminal prosecution "sends the message that absolute care must be taken to ensure that deadly pathogens do not enter our food supply chain," the FDA said. 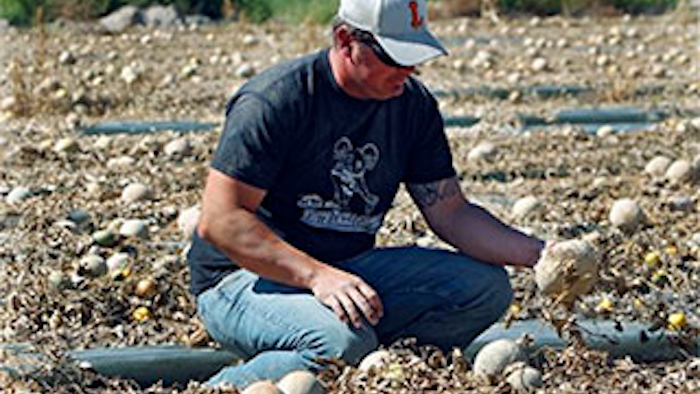 Colorado farmers Eric and Ryan Jensen appeared in shackles in a Denver federal court this week and pleaded not guilty to charges of introducing adulterated food into interstate commerce.

The federal Food and Drug Administration has said conditions at Jensen Farms in southeast Colorado led to a 2011 listeria outbreak that killed 33 people. Officials said people in 28 states ate the contaminated fruit, and 147 required hospitalization.

The criminal prosecution "sends the message that absolute care must be taken to ensure that deadly pathogens do not enter our food supply chain," the FDA said in a statement Friday.

Criminal charges are rare in food-borne illnesses, but the FDA under President Barack Obama has been more aggressive in pursuing farmers and food processors for alleged lapses, said Michael Doyle, director of University of Georgia's Center for Food Safety.

"I think the FDA is sending a strong message that the produce industry is going to have to raise the bar to ensure the safety of the, basically, ready-to-consume foods," he said.

It's the second such warning from the agency, Doyle said. In February, four former employees of a peanut company were charged in Georgia federal court with scheming to manufacture and ship tainted peanuts. A 2009 salmonella outbreak blamed on the peanuts killed nine people and sickened hundreds.

The four pleaded not guilty.

The listeria epidemic traced to Jensen Farms was the nation's deadliest outbreak of foodborne illness in 25 years.

The FDA concluded the melons likely were contaminated in Jensen Farms' packing house. It said dirty water on a floor, and old, hard-to-clean equipment probably were to blame.

The Jensens' trial is scheduled to start Dec. 1. The brothers could face up to six years in prison and $1.5 million in fines each if convicted.

Produce farmers don't have a "true-kill" step to eliminate bacteria, the way dairies and other food producers do, Doyle said.

Pasteurization and proper storage can assure the safety of milk, he said. "We cannot say that with bag salads because we don't have that true-kill step that will kill harmful bacteria," Doyle said.

Higher safety standards are possible for produce, he said, but it will take time and money to develop them, and produce is a low-profit business.

The Jensens farmed 90 miles from the Rocky Ford area, but they used the Rocky Ford name. Hirakata's group registered Rocky Ford as a trademark, hired a full-time food safety manager and built a central packing operation where melons are washed and rinsed.

"This was the business we're in and we wanted to keep doing it, so for us, it was feasible," Hirakata said. "I know there's several smaller farmers in our association (that have) done it. The consumer confidence is there, so it's working."

The Rocky Ford Growers Association sought advice from universities and from the state and federal agriculture departments and reviewed California's cantaloupe safety rules to develop their standards.

Hirakata, a fourth-generation farmer, said the intensified focus on safety has changed farming.

At the end of the growing season, farmers used to say, "The freeze is coming. We've got to work hard and get done," Hirakata said. "Now, it's 'We've got to look back at our operations and see where the risks are.'"

"It's not my grandpa's farm. It's not even my dad's farm anymore," he said. "The face of produce is changing even as we speak."