Prosecutors have charged PG&E with one count of obstructing investigators after the blast and multiple pipeline safety violations. 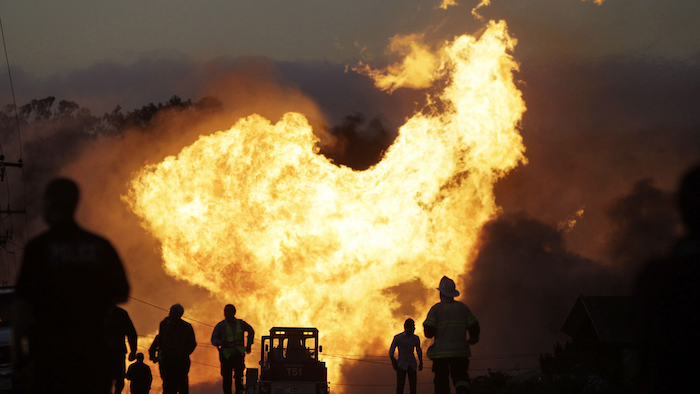 SAN FRANCISCO (AP) — Prosecutors at Pacific Gas & Electric Co.'s upcoming criminal trial cannot show jurors a segment of a pipeline that exploded in a San Francisco Bay Area neighborhood or discuss how many people were killed and homes were destroyed, a federal judge ruled.

PG&E has conceded errors in its records about the pipeline's characteristics, and viewing the pipe could create an emotional response in jurors, U.S. District Court Judge Thelton Henderson said Monday. Prosecutors wanted to bring the roughly 3,000-pound pipeline to a street near the courthouse on a flatbed truck.

Henderson also barred prosecutors from saying how many people died and how many homes were destroyed in the 2010 San Bruno blast as well introducing images of the explosion site. He said that information could unfairly prejudice jurors.

Prosecutors have charged PG&E with one count of obstructing investigators after the blast and multiple pipeline safety violations. PG&E has pleaded not guilty.

PG&E said in a statement Tuesday that its employees did not intentionally violate the Pipeline Safety Act or obstruct an investigation.

"Even where mistakes were made, employees were acting in good faith to provide customers with safe and reliable energy," the company said.

The U.S. Attorney's Office said it had no comment on the ruling.

Jury selection is set to start on April 26. PG&E had sought to block any reference to the San Bruno blast, but Henderson said it was "unquestionably relevant" to the charges in the case.

The explosion makes it "at least somewhat more likely" the pipeline was not properly maintained in accordance with pipeline safety regulations, and it underpins the obstruction charge, Henderson said. The blast killed eight people and destroyed 38 homes.

Investigators have blamed the 2010 blast in part on poor record-keeping at PG&E that they say was based on incomplete and inaccurate pipeline information.

Henderson on Monday also granted PG&E's request to exclude the National Transportation Safety Board's conclusions about the blast, saying jurors might wrongly substitute the NTSB's findings about PG&E's alleged regulatory violations for their own.

Henderson said he would allow prosecutors to present testimony from a former PG&E employee that she experienced resistance when she tried to improve the company's shoddy record-keeping.