Report on 2015 California Refinery Blast to be Unveiled

A blast at a California refinery could have been much worse if debris from the explosion had pierced a nearby tank holding tens of thousands of pounds of a toxic acid, according to an independent federal agency charged with investigating industrial chemical accidents. 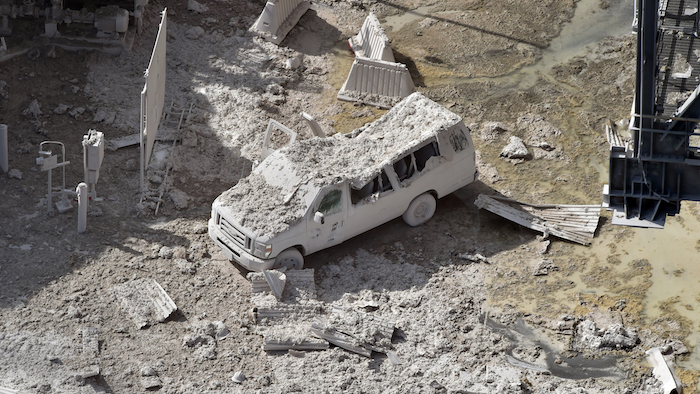 TORRANCE, Calif. (AP) — A blast at a California refinery could have been much worse if debris from the explosion had pierced a nearby tank holding tens of thousands of pounds of a toxic acid, according to an independent federal agency charged with investigating industrial chemical accidents.

Investigators from the U.S. Chemical Safety Board are expected to discuss that near-hit and other safety issues on Wednesday as they present a report on the Feb. 18, 2015 blast that injured four contractors and coated neighboring homes and cars with white ash.

ExxonMobil sold the refinery to New Jersey-based PBF Energy Inc. in September, but continued repairs have delayed the deal.

California workplace regulators issued $566,000 in fines last summer for health and safety violations related to the blast. The plant is located in a densely populated area of the city of Torrance, about 20 miles southwest of Los Angeles.

A state investigation by the California Occupational Health and Safety Administration — also known as Cal OHSA — blamed the blast on a vapor that leaked from a fluid catalytic cracker unit into an electrostatic precipitator.

Management knew the leak posed a hazard but didn't correct the problem and had had problems with the FCC unit for as long as nine years, Cal OHSA said.

The company is appealing the agency's findings.

"ExxonMobil stands on its record of good faith compliance with all agencies, including the Chemical Safety Board, and we look forward to hearing their perspectives on the incident and reviewing the preliminary report," Todd Spitler, a spokesman for ExxonMobil, said in a statement Tuesday night.

Spitler's statement said the company's investigation found there was no evidence of harm to the community from the damaged unit at the refinery, and ExxonMobil has stringent safety measures in place to assure that's the case.

The latest update from the independent federal investigators comes amid growing concern from residents and state lawmakers about the refinery's use of modified hydrofluoric acid, or HF, at the site.

Debris from scaffolding went flying during the explosion and could have caused a "potentially catastrophic release of extremely toxic modified HF into the neighboring community," the U.S. Chemical Safety Board said in a statement.

Residents have formed a watchdog group to pressure the refinery over its use of modified hydrofluoric acid, which is used as a catalyst to make higher-octane fuels, since last year's incident.

"A piece of equipment was sent flying out and it landed just feet from a tankful of modified hydrofluoric acid. Even though the explosion didn't cause a release, it was just because of dumb luck," said Sally Hayati, a member of the Torrance Refinery Action Alliance.

"There are a lot of people in our area who don't even know it's at the refinery. There are some of us who do know and we're concerned, we're very concerned."

Two other recent incidents at the plant have also frayed nerves.

In September, the Fire Department reported a leak of modified hydrofluoric acid and a month later, a leak in a pressurized pipe caused a large steam cloud above the refinery as sirens urged residents to shelter in place.

ExxonMobil said what had leaked was mostly steam. A state investigation is pending.

The refinery on 750 acres produces 1.8 billion gallons of gasoline a year, which accounts for about 8.3 percent of the state's total refining capacity. It is capable of producing 155,000 barrels of crude oil a day.