Rescuers have dropped provisions to four Chinese mine workers trapped for 10 days in a wrecked gypsum mine and are slowly drilling a route to save them, state media said Monday. 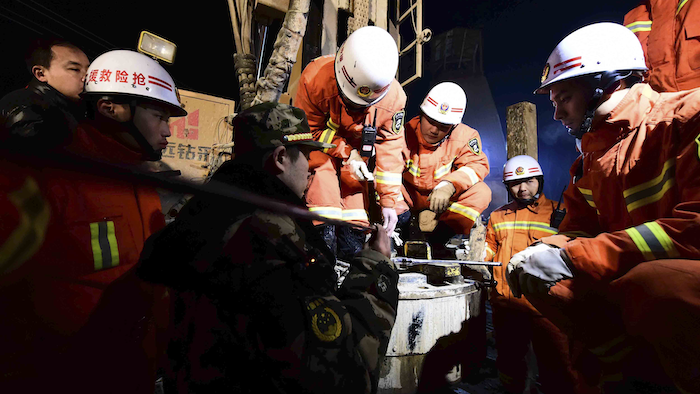 BEIJING (AP) — Rescuers have dropped provisions to four Chinese mine workers trapped for 10 days in a wrecked gypsum mine and are slowly drilling a route to save them, state media said Monday.

The men are trapped more than 200 meters below the surface, and state media has reported they are in good condition. Because the ground is so fragile, the rescuers managed to drill only 25 meters deep after more than 40 hours, China National Radio reported.

Rescue leader Du Bingjian said he could not give a time when the men would be pulled up, according to the radio report.

The Dec. 25 mine collapse in Shandong province killed at least one person. Thirteen others are missing, and 11 made it to safety or were rescued earlier.

Rescuers initially believed they had found eight trapped survivors but were able to make contact with only four.

The same narrow opening used for the cameras was used to deliver bottles of nutritional liquid, which would have to float on water toward the trapped men. But the so-called lifeline hole is not wide enough for a person.

Gypsum is a soft sulfate mineral that is widely used in construction.

After the collapse, the mine owner, Ma Congbo, jumped into a well and drowned in an apparent suicide. Four local government officials have been fired.

China's mines have long been the world's deadliest, but safety improvements have reduced deaths in recent years. In 2014, 931 people were killed in mine accidents in China, drastically down from the year 2002, when nearly 7,000 miners died.