Worst Case Scenario: Fight or Flight When an Isopropyl Alcohol Spill Could Ignite? 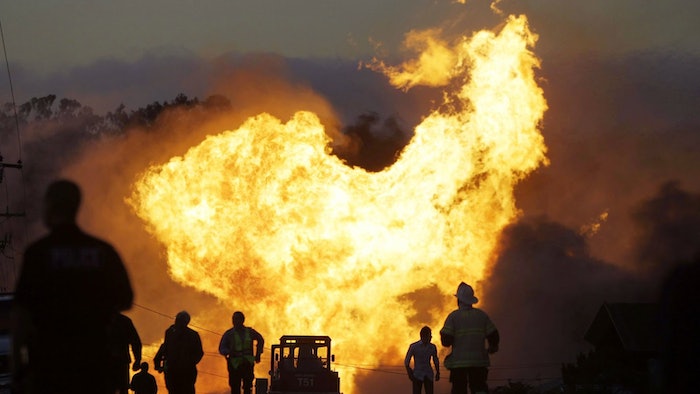 The scene: You’re near a tanker truck that is offloading isopropyl alcohol, or IPA, at your chemical repackaging facility. IPA is a colorless compound that is highly flammable. When it comes into contact with even the smallest ignition source, like static electricity, it can light up. It also has a flash point of around 55 degrees Fahrenheit — meaning that it will easily ignite at temperatures in most workplaces. IPA evaporates quickly and completely, adding large amounts of vapor to the air.

It’s a hot summer day and the IPA is flowing from an off-loading hose into an industrial tank that holds about 10,000 gallons, when you look up to see the worst case scenario unfolding: IPA is gushing from the hose. Enough IPA is on the floor that it would come up to your ankles if you were standing in it. Either the hose had a hole or the hookup failed. Either way, you have only seconds to act.

What do you do?

A) Go to the truck and turn off the hose to stop the flow of IPA.

B) Turn and run from the offloading area as fast as you can. Hit the emergency alarm on the way out so that all employees know they have to evacuate quickly.

C) Open windows and allow more ventilation so that the IPA will evaporate.

SCROLL DOWN TO SEE THE BEST ANSWER.

B) In this case the only feasible option is to turn and run from the area as fast as you can. Hit the emergency evacuation alarm on the way out so that all employees know they have to evacuate quickly.

According to Scott Harris, a chemical safety expert and director of EHS services with Alamo1, your instincts may tell you to stop the flow of IPA to protect the facility, but in the minute it could take you to do that, the chemical could ignite. And on a hot day, waiting for it to evaporate with the hope it won't ignite is beyond dicey.

In fact, this exact scenario played out in 2005 at Valley Solvent and Chemical Company in Fort Worth, TX.  The worker confronted with the situation fled immediately, stopping only to hit an alarm to warn others. His instincts saved his life. The employee told investigators that as he saw the IPA flow, it ignited and he ran from the building with a fireball at his back.

Luckily, all of the employees made it out alive. But Valley’s chemical warehouse was completely engulfed in flames that destroyed the building. At the time, Harris was working nearby with the Environmental Protection Agency and he arrived at the scene to see storage tanks flying in the air (BLEVEs) as the warehouse burned.

Are you a chemical safety expert with a Worst Case Scenario to share? Don't hesitate to shout! Email meagan.parrish@advantagemedia.com.

An expert on environmental pollution and maternal health explains what it all means.
Jun 17th, 2022
Follow Us
Most Recent