Improve Safety With Light Communication At The Loading Dock

Despite all the chaos that ensues at the loading dock, the truth is nearly 70 percent of accidents can be prevented with equipment and technology that already exists. 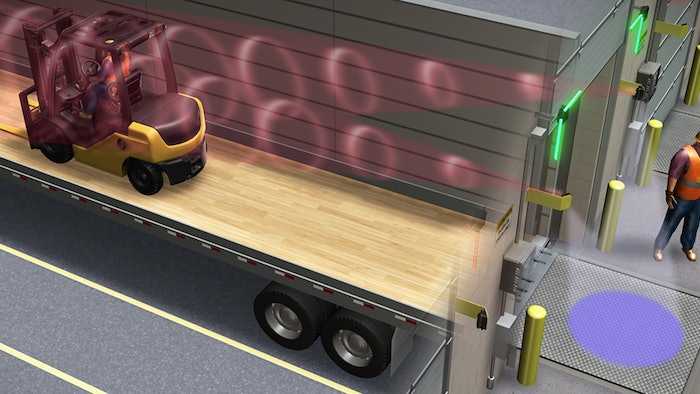 Forklifts moving in and out of trailers, employees hurrying to keep up with productivity goals, trailer separation accidents, and aging or unfamiliar equipment are just a few of the risks workers face at the loading dock. Sadly, the statistics bear this out. According to OSHA, there is a forklift-related death about every three days. Overall, there are approximately 95,000 accidents involving a forklift every year, causing losses of an estimated $135 million in direct cost and $650 million in indirect costs.

Despite all the chaos that ensues at the loading dock, the truth is nearly 70 percent of these accidents can be prevented with equipment and technology that already exists. This includes technology that clearly communicates dangers to forklift operators and other workers using LED lights, as well as audible and visual alarms for an additional layer of security.

Light Communication Inside The dock

The traditional red/green signaling system has become a familiar fixture at plants and warehouses in the last several decades. Inside, a green light tells the forklift operator the trailer is secured and safe to enter. Outside, the light turns to red, letting the truck driver know that it is not safe to pull away from the dock, as the trailer might still be getting serviced. The lights are reversed when the restraint gets unlocked, telling the truck driver he can depart safely.

While a good start in safety, these communication tools remained virtually unchanged for years and carry several weaknesses. For example, it is not uncommon for a forklift driver’s view of the control box (where most red/green lights are housed) to get obscured by pallets in a staging area. To address this problem, highly visible LED status-at-a-glance lights at the corners of dock doors and dock levelers have made work even safer for lift truck drivers and dock workers during loading and unloading.

The most recent developments in dock safety involve motion sensor-based systems in the dock area. One such system projects a blue light (similar to forklift safety lights) onto the leveler when activity is detected inside a trailer, alerting workers that a pedestrian or material handling equipment could back out at any moment. Considering that 53 percent of forklift fatalities are the result of workers being struck or crushed by a forklift inside the dock, this is a step in the right direction. This type of system can be integrated with advanced control boxes to keep the vehicle restraint locked until the activity stops, ensuring the trailer doesn’t pull away with a forklift operator still inside.

Risks exist outside the loading dock, as well. In fact, OSHA is currently considering a new rule that addresses backing vehicles and equipment, which are common causes of struck-by injuries. This type of injury and caught-between injuries are two of the four leading causes of workplace fatalities.

Backing trailers pose this exact type of threat. Due to the 70-foot-plus distance between the dock position and the truck’s engine, as well as other distractions in the loading dock yard, this back-over hazard can go undetected by workers until it’s too late for them to avoid being struck. According to OSHA, there have been 40 fatal accidents involving backing tractor trailers in a 6-year span.

To address this challenge, a number of new safety products have been developed. For example, some vehicle restraints now incorporate an external motion sensor, which triggers an audible and visual alarm to alert workers outside the dock when a trailer begins backing in. These types of multisensory warnings immediately gain the attention of workers who might be in harm’s way.

Although loading docks traditionally have been relatively low-tech areas, there are new high-tech options available to make these dangerous work zones a lot safer. Much like the widespread adoption of hydraulic levelers and automatic vehicle restraints reduced workers’ risk of injury a generation ago, motion sensors that use LED lights and alarms to communicate impending hazards are making the loading docks of today safer, both inside and out.

Chad Dillavou is a product manager at Rite-Hite Products.