Ian Power was among the first to buy legal recreational marijuana in Canada but he has no plans to smoke it. He plans to frame it. 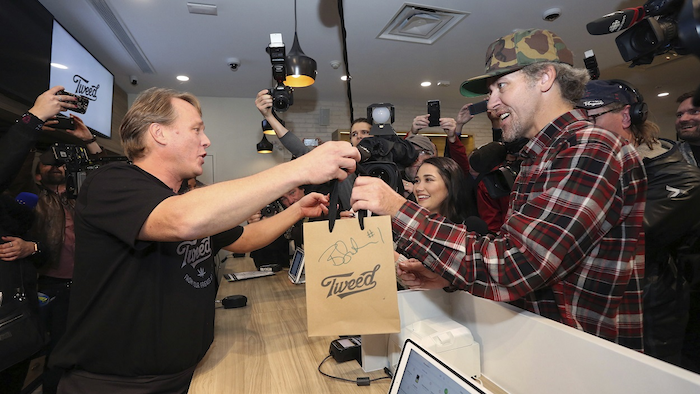 Canopy Growth CEO Bruce Linton, left to right, passes a bag with the first legal cannabis for recreation use sold in Canada to Nikki Rose and Ian Power at the Tweed shop on Water Street in St. John's N.L. at 12:01 am NDT on Wednesday Oct. 17, 2018. Image credit: Paul Daly/The Canadian Press via AP

Ian Power was among the first to buy legal recreational marijuana in Canada but he has no plans to smoke it. He plans to frame it.

Canada became the largest country with a legal national marijuana marketplace as sales began early Wednesday in Newfoundland. Power was first in line at a store in St. John's, Newfoundland.

"I am going to frame it and hang it on my wall. I'm not even going to smoke it. I'm just going to save it forever," Power said.

And there was more good news for pot aficionados: Hours before a handful of retail outlets opened in the country's easternmost province a federal official told The Associated Press that Canada will pardon all those with convictions for possessing up to 30 grams of marijuana, the now-legal threshold.

A formal announcement was planned for later Wednesday. The official, who was not authorized to speak public ahead of the announcement, said those who want to take advantage of the pardons will have to apply.

Canada has had legal medical marijuana since 2001 and Prime Minister Justin Trudeau's government has spent two years working toward expanding that to include recreational marijuana. The goal is to better reflect society's changing opinion about marijuana and bring black market operators into a regulated system.

"Profits out of the hands of criminals. Protection for kids. Today #cannabis is legalized and regulated across Canada," Trudeau tweeted.

Uruguay was first was the first country to legalize marijuana.

In St. John's, Newfoundland, hundreds of customers were lined up around the block at the private store on Water Street, the main commercial drag in the provincial capital, by the time the clock struck midnight. A festive atmosphere broke out, with some customers lighting up on the sidewalk and motorists honking their horns in support as they drove by the crowd.

"Prohibition has ended right now. We just made history," said the 46-year-old Power, who bought a gram. "I can't believe we did it. All the years of activism paid off. "

Bruce Linton, the CEO of marijuana producer and retailer Canopy Growth, made the sale to Power.

"It was extremely emotional," he said. "Several people who work for us have been working on this for their entire adult life and several of them were in tears."

Linton said Canada is at the forefront of the industry because it is federally legal in Canada and federally illegal in the U.S.

"The last time Canada was this far ahead in anything, Alexander Graham Bell made a phone call," said Linton, whose company recently received an investment of $4 billion from Constellation Brands, whose holdings include Corona beer and Robert Mondavi wines.

Tom Clarke, an illegal pot dealer for three decades, was also among the first to make a legal sale in Canada when his store opened at midnight local time in Portugal Cove, Newfoundland. He made the first sale to his dad. A crowd of 50 to 100 people waited outside and cheered him.

"This is awesome. I've been waiting my whole life for this," Clarke said. "I am so happy to be living in Canada right now instead of south of the border."

Clarke, whose middle name is Herb, has been called THC for years by his friends. His dad, Don, said he was thrilled he was among the first customers of legal pot.

"It's been a long time coming. We've only been discussing this for 50 years. It's better late than never," he said.

The Newfoundland stores are among at least 111 legal pot shops expected to open across the nation of 37 million people on Wednesday, with many more to come, according to an Associated Press survey of the provinces.

Canadians also can order marijuana products through websites run by provinces or private retailers and have it delivered to their homes by mail.

Alberta and Quebec have set the minimum age for purchase at 18, while others have made it 19.

No stores will open in Ontario, which includes Toronto. The most populous province is working on its regulations and doesn't expect stores until next spring.

A patchwork of regulations has spread in Canada as each province takes its own approach within the framework set out by the federal government. Some are operating government-run stores, some are allowing private retailers, some both.

Canada's national approach has allowed for unfettered industry banking, inter-province shipments of cannabis and billions of dollars in investment — a sharp contrast with national prohibition in the United States.

Nine U.S. states have legalized recreational use of pot, and more than 30 have approved medical marijuana. California, the largest legal market in the U.S., earlier this month became the first state with a law mandating expungement of criminal convictions for marijuana-related offenses that no are longer illegal.

"Now that our neighbor to the north is opening its legal cannabis market, the longer we delay, the longer we miss out on potentially significant economic opportunities for Oregon and other states across the country," he said in a statement.

U.S. Customs and Border Protection invited Canadian media to a conference call on Tuesday so officials could reiterate that marijuana remains illegal under U.S. federal law and that those who are caught at the border with pot are subject to arrest and prosecution.

As Canada welcomes legalization, supply shortages could develop, as happened in some U.S. states when legalization arrived.

Brenda Tobin and her son Trevor plan to open their pot shop in Labrador City in Newfoundland and Labrador at 4:20 p.m. Wednesday — 420 is slang for the consumption of cannabis. Tobin, a longtime convenience store owner, said they will be cutting a ribbon and cake.

"We are just ecstatic," she said.

She expects to run out in few days and doesn't know when she'll get her next order in. She doesn't expect to make much money off the pot itself, noting Newfoundland's 8 percent cap on retail pot profits. She hopes to make money from pipes, bongs and marijuana paraphernalia. 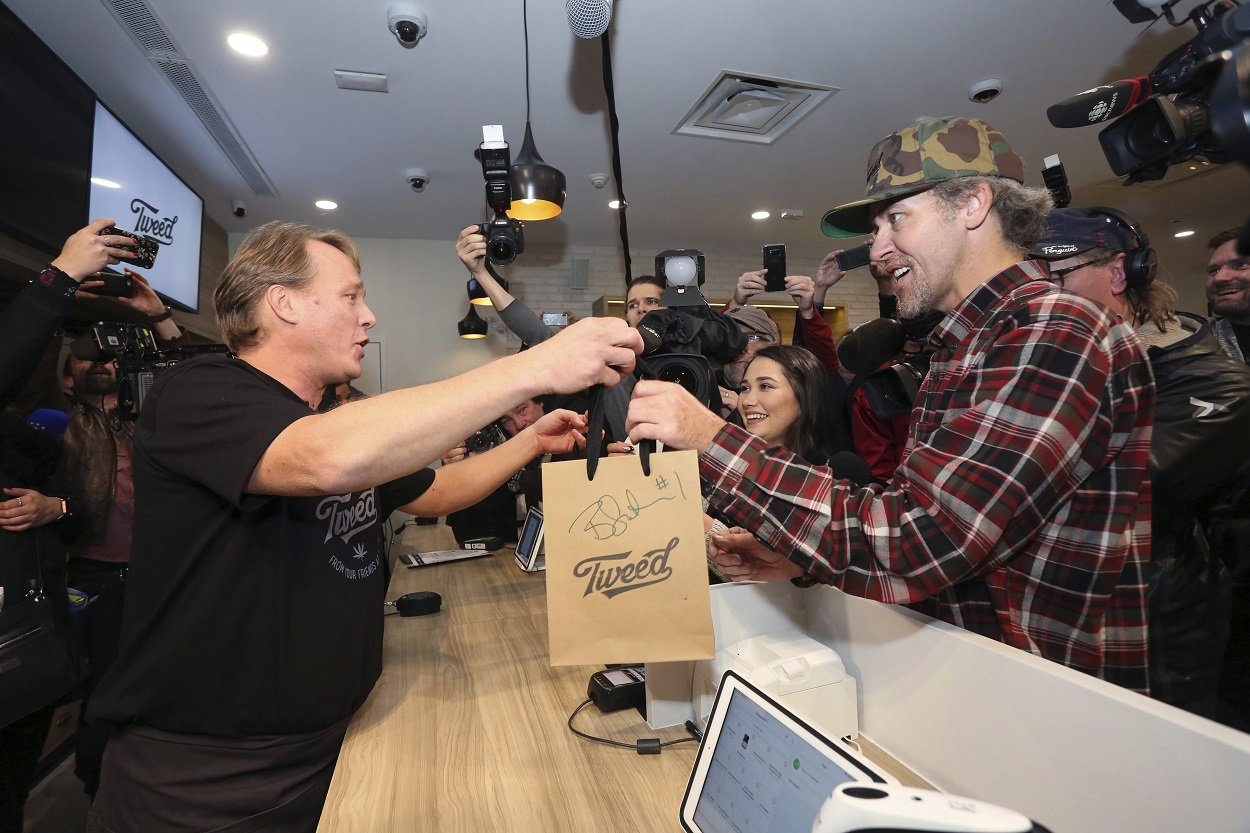 Canopy Growth CEO Bruce Linton, left to right, passes a bag with the first legal cannabis for recreation use sold in Canada to Nikki Rose and Ian Power at the Tweed shop on Water Street in St. John's N.L. at 12:01 am NDT on Wednesday Oct. 17, 2018. Image credit: Paul Daly/The Canadian Press via AP
Latest in Operations