Valeant To Spend About $1B On Maker Of Women's Libido Drug

Valeant Pharmaceuticals will pay about $1 billion in cash to buy Sprout Pharmaceuticals, the maker of the first prescription drug intended to boost sexual desire in women. 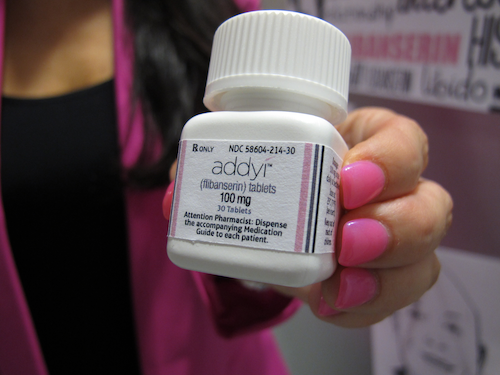 WASHINGTON (AP) — Valeant Pharmaceuticals will pay about $1 billion in cash to buy Sprout Pharmaceuticals, the maker of the first prescription drug intended to boost sexual desire in women.

The deal comes two days after U.S. regulators approved the pill Addyi, a milestone for the drug industry that could revive interest in medications for women's sexual problems.

Founded by a husband-and-wife team, Sprout has aggressively pushed the case for their product for years, arguing in dozens of interviews that the Food and Drug Administration had unfairly overlooked women's sexual disorders. But the company gave no hint of plans to sell the drug to a larger company.

"After all their talk about women's health disparities, it's time for Sprout's founders to just take the money and run," said Erik Gordon, a business professor at the University of Michigan.

Sprout CEO Cindy Whitehead responded Thursday that she would continue to lead Sprout, which will become a division of Valeant.

"I'm not going anywhere and am very excited to continue working with our 34 employees," Whitehead said in a statement.

Gordon and some other analysts predicted the buyout, noting that Sprout had only a few dozen employees in its Raleigh offices. Gordon said Valeant has the size and expertise to market the new pill.

"Valeant is not a drug development company, they are a drug marketing company," said Gordon. "They are famous for buying a company, closing down their research and flogging the product."

The Canadian drugmaker has traditionally grown through acquisitions of companies in the dermatology, eye health and neurology fields. The Sprout purchase expands Valeant's portfolio into women's health.

A Valeant spokesman responded that the company has launched more than 20 products in the last year, the majority of which came from its own labs.

For decades, many of the world's biggest pharmaceutical companies tried unsuccessfully to develop a female equivalent to Viagra, the blockbuster drug that treats men's erectile dysfunction by increasing blood flow. But disorders of women's sexual desire have proven resistant to drugs that act on blood flow, hormones and other simple biological functions.

Sprout's drug acts on brain chemicals that affect mood and appetite. The drug was actually acquired from German conglomerate Boehringer Ingelheim in 2011, after the FDA initially rejected the drug.

The $1 billion price tag for Sprout is likely to boost interest in a handful of other small drugmakers pursuing women's libido drugs. The leading player in the field is Palatin Technologies, which is working on an on-demand treatment to boost sexual desire for several hours at time. That approach may be preferable to Sprout's Addyi, which is a daily pill with side effects including nausea, dizziness and fatigue.

Sales of Addyi are expected to be limited by a strong warning label attached to it and an FDA-imposed safety plan for prescribing. The warning will alert doctors and patients to the risks of dangerously low blood pressure and fainting, especially when the pill is combined with alcohol.

Under the safety plan, doctors will be able to prescribe Addyi only after completing an online certification process that requires counseling patients about the drug's risks. Pharmacists also will need certification and be required to remind patients not to drink alcohol while taking the drug.

Valeant plans to pay about $500 million at closing for Raleigh, North Carolina-based Sprout this quarter. The Canadian drugmaker will then make another milestone-based payment of around $500 million in the first quarter of next year.