The United States' commercial ties with Cuba were broken 54 years ago after Fidel Castro took over. Now U.S.-Cuba trade is poised to resume: President Barack Obama on Wednesday announced plans to re-establish diplomat relations with Havana, and economic ties are expected to follow. 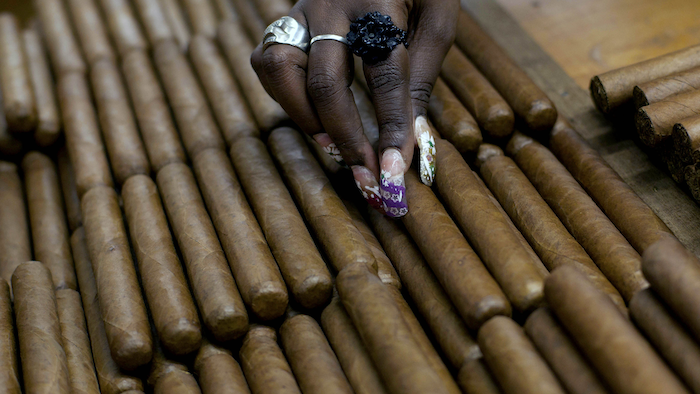 WASHINGTON (AP) — Freighters once carried Cuban nickel and limestone to the port of New Orleans and North Dakota beans to Havana. Cuban families ate bowls of American rice, while U.S. tourists flocked to casinos and nightclubs in Havana.

The United States' commercial ties with Cuba were broken 54 years ago after Fidel Castro took over. Now U.S.-Cuba trade is poised to resume: President Barack Obama on Wednesday announced plans to re-establish diplomat relations with Havana, and economic ties are expected to follow.

Among those eager for access to a Cuban market cut off by an economic embargo are U.S. farmers, travel companies, energy producers and importers of rum and cigars.

"We've been positioning ourselves for this day for many years," says Erik Herzfeld, co-portfolio manager of the Herzfeld Caribbean Basin fund, which has been investing in "the cruise lines, infrastructure (companies), any company that we think will eventually have a role in Cuba." The fund rose $1.97, or 28.9 percent, to $8.78 on Wednesday.

Gary Hufbauer and Barbara Kotschwar of the Peterson Institute for International Economics estimate that exports of U.S. goods to Cuba could reach $4.3 billion a year, compared to less than $360 million last year. And Cuban merchandise imports to the U.S. could go to $5.8 billion a year from nothing now.

Congress will still have to act to lift economic sanctions against Cuba. But by loosening restrictions on travel and permitting travelers to use U.S. credit and debit cards in Cuba, among other things, Obama may have started a process that can't be reversed.

"It's like putting toothpaste back in the tube," says Kirby Jones, a consultant who has pushed for U.S.-Cuba trade ties. "People are going to get used to travel, used to doing business, used to sending remittances. You can't stop it.

Not everyone supports the change in U.S. policy. Victor Benitez, longtime general manager of a car dealership north of Miami, says he would not return to the country he fled with his family in 1969 — at least not until it became a democracy. "I'm proud to be an American," he said. "I'm sorry I cannot say I'm Cuban even though in my heart I feel very Cuban."

But many U.S. businesses are already perking up at the prospect of regaining access to Cuba.

Before the Cuban revolution, U.S. farmers did big business with Cuba, exporting beans, rice and other commodities. The U.S. now exports limited amounts of farm products.

Detroit automakers would seem to have an opportunity to replace the 1950s' American jalopies that now rattle down Cuban streets, but they weren't saying much Wednesday. "We're encouraged by the announcements today, and we'll evaluate the opportunities," says General Motors spokesman Pat Morrissey, without further comment.

For the first time in decades, Cuba's government this year allowed residents to purchase cars from state-run dealerships without a special permit. But sales went nowhere as potential buyers were put off by high prices.

The hamburger chain Fatburger began discussing franchises with potential business partners in Cuba more than four years ago, says Andy Wiederhorn, CEO of the Los Angeles-based company. Once Fatburger gets U.S. government approval, it could take six months to a year to open the first franchises. Wiederhorn's initial goal is six to 12 stores.

"The economy will be our biggest challenge," says Wiederhorn, whose company has restaurants in 32 countries. "The purchasing power of the consumer is very limited."

Gym operator Anytime Fitness is considering soon laying the groundwork for a Cuban franchise. The company, which has more than 700 locations outside the U.S., will first need a Cuban business partner. Then it must introduce the idea of fitness to Cuban consumers. "There's not the awareness of the importance of regular exercise, and certainly not in a gym environment," says John Kersh, head of international development.

Mortimer Singer, CEO of Marvin Traub Associates, a retail consultancy that helped bring Bloomingdale's to Dubai, says he will be encouraging his clients to pursue opportunities in Cuba. He notes that fast food franchises and mass stores will be the first to open in Cuba, a repeat of what happened in other emerging markets. But he believes department stores will follow.

"It will start with the mass market and trickle up," he notes. But Singer believes business will still face restrictions in the early years, and finding a business partner will be challenging.

Currently, a player who defects from Cuba has to obtain a license from the U.S. Treasury Department before he can sign with a Major League Baseball team. That hasn't stopped Cuban ballplayers: Outfielder Rusney Castillo and the Boston Red Sox agreed in August to a $72.5 million, seven-year contract.

Smugglers have preferred to help Cuban players age 23 or older defect, because they have been able to sign more lucrative contracts. If the trade embargo is lifted and Cuban residents are allowed to sign with MLB teams, there could be more young Cuban players in the U.S. Dominican players, for example, often sign at age 16.

But the MLB has said it wants to start an international draft in 2017. That could limit the amount teams are willing to spend on Cuban free agents.

Obama says Cubans should have access to "technology that has empowered individuals around the globe." About 27 percent of Cuba's population has access to the Internet, according to Internet Live Stats, which uses information from the International Telecommunication Union, the United Nations and the World Bank to estimate the world's Internet users. That puts the country behind countries such as Iran and Kenya but ahead of Syria and Sudan, for example.

"This could be huge, a really transformative change," said Daniel Castro, a senior analyst for the Information Technology and Innovation Foundation, a Washington, D.C. think tank.

Doug Madory, director of Internet Analysis at Dyn Research, thinks Cuba should auction off telecommunications licenses to global companies. He acknowledges that would require a "tremendous mind shift" on the part of the Cuban government.

The waters off the island's northern coast are believed to contain oil. But international oil companies have been reluctant to explore for there for fear of angering the United States. The Spanish oil company Repsol drilled off shore in 2012 but did not find oil and gave up.

Sarah Ladislaw, director of the energy and national security program at the Center for Strategic and International Studies, says promising drilling locations remain. "There is lots more exploration people want to do," she says.

"It's the beginning," says Teo Babun, a Miami consultant.