Friday's acquittal of a former high-ranking BP executive charged with lying to investigators looking into the 2010 Gulf of Mexico oil spill marked the latest setback for federal prosecutors pursuing criminal charges in the disaster. 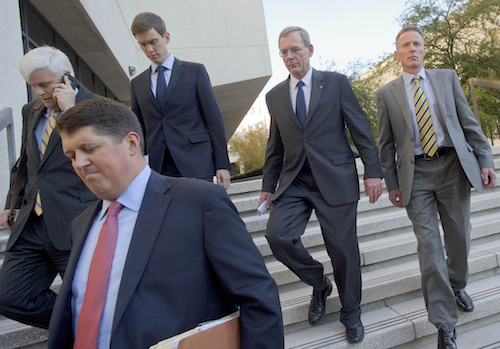 A federal jury took about two hours to find David Rainey not guilty of making false statements. Days before, U.S. District Judge Kurt Engelhardt had tossed out a related charge that Rainey obstructed a congressional investigation of the spill. Engelhardt told jurors before discharging them Friday that he agreed with their verdict.

Mix, in 2013, had been acquitted on one criminal count but convicted on a charge that he knowingly deleted text messages about the spill. However, that victory for prosecutors was tossed out by a judge who said the verdict was tainted by a jury forewoman's remark — to an apparently deadlocked panel — about something she had heard outside the courtroom.

The appeals court decision in the Mix case is pending.

As for Rainey, he had been tasked, in the days after the Deepwater Horizon explosion, with calculating the amount of oil gushing into the gulf.

Prosecutors said he manipulated his calculations to match a far-too-low government estimate of the flow rate. He was charged with lying about having done so during an interview with federal investigators almost a year later.

"Today's verdict demonstrates how difficult it is to prosecute individuals when the primary culprit is a corporate culture run amok," Uhlmann, a University of Michigan law professor and former chief of the Justice Department's environmental crimes section, said in an email.

"In its case against David Rainey, the Justice Department also faced a significant evidentiary hurdle, which is that no one knows how much oil gushed into the Gulf of Mexico during the Gulf oil spill," Uhlmann added.

Indeed, Rainey's attorneys built much of their defense on the inability of anyone, in the early days of the spill, to figure out how much oil was flowing. And, they argued, an estimate was largely irrelevant because an all-out effort was being made to cap the well, regardless of how much was spewing.

"It was a fool's errand," defense lawyer Reid Weingarten said of Rainey's task. "It was demanded by politicians and the press. And he reluctantly took up the cudgel and came up with his best response."

BP declined comment Friday. Rainey, whose defense was paid for by his former employer, smiled but declined to talk to reporters as he walked briskly out of the courtroom to hug family members.

The government has had some successes. In November of 2012, federal authorities and the oil giant announced a settlement of criminal cases arising from the explosion, the resulting deaths of 11 rig workers, and the aftermath. The corporation agreed to plead guilty to charges including 11 felony counts of misconduct or neglect of a vessel's officers, one felony count of obstruction of Congress, and one misdemeanor count each under the Migratory Bird Treaty Act and the Clean Water Act. Penalties totaled $4.5 billion.

Trial is pending for BP well-site leaders Robert Kaluza and Donald Vidrine, who have pleaded not guilty to manslaughter charges stemming from the 11 deaths. They are charged with repeatedly disregarding abnormal high-pressure readings that should have been glaring indications of trouble just before the blowout.

The Deepwater Horizon explosion resulted in the nation's worst offshore oil spill — an 87-day underwater gusher. A federal judge overseeing civil litigation in the case acknowledged this year that estimates of how much oil was released vary widely, but he settled on a figure of about 3.19 million barrels — a rate of more than 36,000 barrels per day.

Various early estimates were much lower. Rainey's trial focused on an early National Oceanic and Atmospheric Administration estimate, days after the spill began, of about 5,000 barrels a day, and whether Rainey had "backed into" his own calculations to match that estimate.