With just a few electronic amenities offered, the Miata stays true to its heritage — a car to drive and to enjoy driving, not a car to inhabit while talking on the cell phone and following programmed directions from an in-car navigation system. 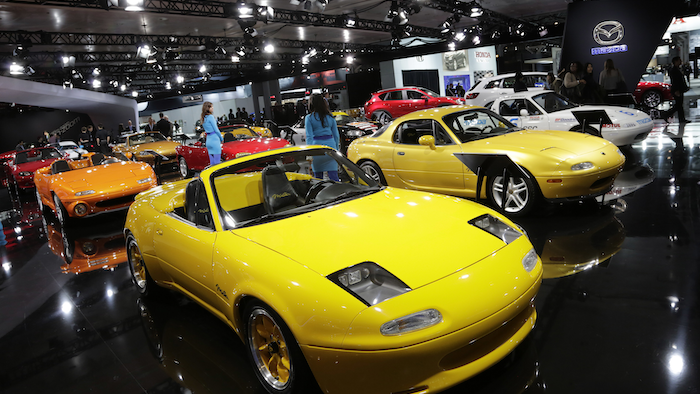 Twenty-five years after its debut as a lightweight, fun-to-drive, sporty roadster, the Mazda MX-5 Miata still travels a road all its own.

With a starting retail price of less than $25,000, the rear-wheel drive Miata is arguably the most affordable two-seat sportster in the United States.

Only the diminutive and decidedly not sporty, 70-horsepower, 2014 Smart fortwo Passion Cabriolet, with a starting retail price of $18,680, has a lower starting price for a two-seater.

With just a few electronic amenities offered, the Miata stays true to its heritage — a car to drive and to enjoy driving, not a car to inhabit while talking on the cell phone and following programmed directions from an in-car navigation system.

In fact, today's Miata doesn't offer a factory navigation system or a large, colorful display screen for the dashboard. Some versions of Miata don't have Bluetooth hands-free phone connectivity, either. And forget about finding a heated steering wheel or seats with power adjustments.

The 167-horsepower Miata is, simply, all about driving pleasure and how a low-to-the-ground car happily hugs the pavement, how it readily scoots forward and how it can make a driver feel at one with the vehicle.

No wonder the Miata has long been sought after by weekend racers who find the lightweight two-seater to be an impressive racetrack competitor.

Perhaps best of all, the 2014 Miata is a recommended buy of Consumer Reports, where predicted reliability is average.

Starting manufacturer's suggested retail price, including destination charge, of $24,515 is for a base, 2014Miata with 2-liter, naturally aspirated, four-cylinder engine and five-speed manual transmission.

Over the years, there were other affordable competitors to the Miata, including the Toyota MR2, Honda S2000 and Pontiac Solstice. But they didn't last.

With styling reminiscent of the beloved British and Italian roadsters of the 1950s and '60s, the Miata — with relatively long hood and short rear deck holding a small, 5.3-cubic-foot trunk — is instantly recognizable.

Today's Miata, at 13.1 feet from bumper to bumper, is a tad longer than the original that measured less than 13 feet in length. But weight is tightly controlled at just 2,610 pounds for a base car.

Widthwise, the Miata interior can still feel a bit snug for larger-sized folks. As an example, a couple of heavyset gentlemen inside can feel cozy and maybe hemmed in.

But the Miata's 43.1 inches of legroom are more than what's expected, while headroom of 37.4 inches is akin to what's found in the back seat of a 2014 Honda Civic sedan.

Headroom shouldn't be too much of a worry, though, because the appeal of the Miata is driving with the top down.

The test 2014 Miata, an uplevel Club model with power-operated hard top, felt somewhat Spartan inside as seats had to be adjusted by hand and the dashboard looked barebones compared with other cars with oodles of buttons and large display screens.

But pleasing engines sounds and the Miata's eager, sprightly personality soon proved to be a tonic to a driving enthusiast.

The Miata's small diameter steering wheel felt just right. Steering response was quick. The shifter had short, crisp throws — and suddenly the driver was all into the driving and the intimate sensations of road, open air and movement.

The reverie came to a screeching halt, however, when taller, blocky vehicles — which basically include everything from Cadillac Escalades to Toyota Corollas — got in front. Then, the driver stared at tailpipes and rear bumpers.

Another noticeable issue: The Miata's ride is loud from road noise and the high revs of the double overhead cam four cylinder. Peak torque of 140 foot-pounds comes at 5,000 rpm.

With body motions closely controlled, the sporty ride of the Miata over rough pavement and manhole covers also may wear on some.

Many consumers are shocked to find the 2014 Miata's fuel economy is lackluster for a car that carries only two people.

In fact, the U.S. government fuel mileage ratings for a 2014 Miata are just 21 to 22 miles per gallon in city travel and 28 mpg on the highway. These numbers are less than the ratings for the 2014 Mazda2 and Mazda3, which have seats for five.

Data Breaches Are A New Source Of Worry For CEOs