Jon Callas, co-founder of Silent Circle, which sells an encryption app allowing users to talk and text in private, said a series of disclosures from former intelligence contractor Edward Snowden last year have been a boon for business. 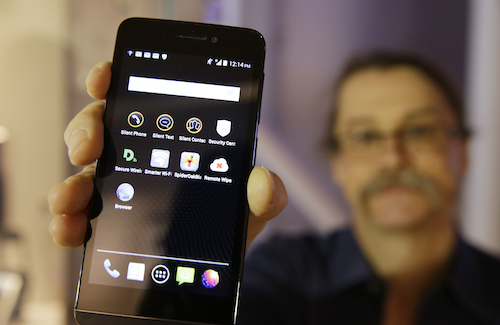 MOUNTAIN VIEW, Calif. (AP) — Revelations about the National Security Agency's electronic eavesdropping capabilities have sparked anger in Germany and a boom in encryption services that make it hard for the most sophisticated spies to read emails, listen to calls or comb through texts.

Jon Callas, co-founder of Silent Circle, which sells an encryption app allowing users to talk and text in private, said a series of disclosures from former intelligence contractor Edward Snowden last year have been a boon for business.

Silent Circle is one of a host of online security companies cashing in on swarms of new security-conscious customers around the world who want to shield their communications from foreign governments — and nowhere is the market hotter than in Germany, whose chancellor, Angela Merkel, was reported to be a target.

"Germans have always been particularly attuned to security and privacy concerns," Callas said. "I think that culturally, Germany has seen privacy problems in their recent past. There are people who remember the communists. There is still a cultural sore spot over security and privacy, an understanding of what can go wrong better than any other place in the world."

The companies' customers range from diplomats and journalists to privacy advocates and people trying to protect trade secrets.

Although Silent Circle doesn't provide specific numbers, Callas said it saw a "huge increase" in subscriptions to its private phone and text service after Snowden's disclosures and a spike in Germany after two reported cases of suspected U.S. spying there earlier this year.

And while the technology has Silicon Valley roots, the servers are in Canada and Switzerland, two countries with strong privacy protections. Two weeks ago, Silent Circle also began selling a secure smartphone, whose first run sold out, Callas said.

At CeBIT, a leading tech industry event held annually in the German city of Hannover, Deutsche Telekom was among several companies to launch new security products on the back of Snowden's revelations.

"I want to send a personal thanks to the NSA, because we wouldn't be having this discussing if that hadn't happened," Reinhard Clemens, a Deutsche Telekom board member, told reporters. "That was the best marketing campaign we've ever had."

The company, known for its T-Mobile brand in the United States, sells a smartphone app that encrypts voice and data traffic. It was developed with Berlin-based firm GSMK, an offshoot of the German hacking group Chaos Computer Club.

Customers seeking an all-in-one solution can buy GSMK's $2,750 secure cellphone that will protect confidential communications from all but the most dedicated eavesdroppers.

Chief Executive Bjoern Rupp said his company has seen a surge of interest in its encryption technology since details of the NSA's surveillance capabilities leaked last year.

"Snowden is transforming the industry," Rupp told The Associated Press. "There is a completely new consciousness about security."

Since launching in 2003, the company has sold about 100,000 secure devices, but the number of apps sold in the past year is "in another dimension," said Rupp, without revealing a precise figure.

British rival Vodafone, meanwhile, launched its own "Secure Call" app at the CeBIT fair with the claim it would allow users to make "calls that are as secure as those of the German government."

Merkel herself used to be photographed with a Nokia slider phone. Since reports surfaced that the NSA had listed her among its foreign intelligence targets, the chancellor has avoided being seen with low-end devices. Her new gadget, as widely reported, is a top-range BlackBerry outfitted with a custom-made security suite made by German company Secusmart — endorsed for sensitive communications by Germany's Federal Office for Information Security.

Apparently seizing on the opportunity, BlackBerry recently announced it was buying Secusmart.

"The acquisition of Secusmart underscores our focus on addressing growing security costs and threats ranging from individual privacy to national security," BlackBerry CEO John Chen said in a statement.

Ravishankar Borgaonkar, who works with Telekom Innovation Laboratories and FG Security in Berlin, uses an app on his Samsung smartphone that detects how secure each call is with red and green buttons.

"I try to make my calls as secure as possible," he said. "I get paranoid about some stalker trying to look at my phone, because if they get in it they can get to all my data."

And as someone who works in tech, Borgaonkar said he's getting tapped a lot these days for help.

"All my friends who are not in technology are asking me if their phones are secure, and what they should do," he said.

For those who don't want to take any chances, the revelations have also sparked a retro trend. The country's business weekly Wirtschaftswoche recently reported typewriter sales rising for the first time in years.

German companies aiming to protect their trade secrets apparently have turned to typewriters to ensure their correspondence with foreign clients isn't intercepted by rivals capable of hacking into their computer networks.

Patrick Sensburg, a member of Merkel's conservative bloc and chair of the parliamentary committee investigating alleged NSA spying in Germany, even suggested — only half-jokingly — that he and his fellow lawmakers might start using typewriters to hide the panel's sensitive work.

For all Crisco’s popularity, what exactly is that thick, white substance in the can?
Helen Zoe Veit
Dec 23rd, 2019