U.S. businesses added 213,000 jobs in September, stepping up hiring for the sixth straight month, according to a private survey. 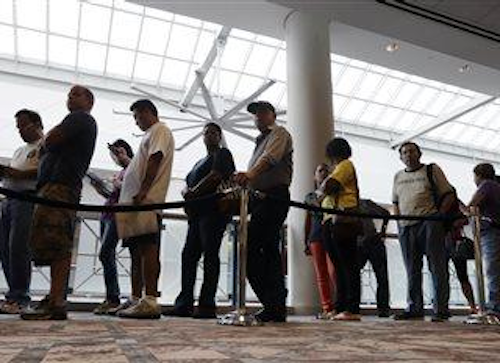 Washington — U.S. businesses added 213,000 jobs in September, stepping up hiring for the sixth straight month, according to a private survey.

Payroll processer ADP said Wednesday that the pace of hiring by private employers was up slightly from 202,000 in August. Job gains above 200,000 are usually enough to lower the unemployment rate.

The figures suggest the government's jobs report on Friday could reveal a rebound in hiring. The government said employers added only 142,000 jobs in August. But the ADP numbers cover only private businesses and sometimes diverge from the government's more comprehensive report. ADP's August figure was much higher than the government's.

Economists surveyed by FactSet forecast that the government's report will show 215,000 jobs were added in September, while the unemployment rate remained 6.1 percent.

The ADP "data add to the evidence that the trend in employment growth remains solid, at least 200,000 per month," said Jim O'Sullivan, an economist at High Frequency Economics.

Americans are more confident in the economy and are spending more. Consumer spending, adjusted for inflation, increased in August at the fastest pace in six months.

Manufacturing firms added 35,000 jobs, more than double the gain in August. That was likely driven by strong hiring by auto companies, Zandi said. Car sales have been healthy all year. Construction companies hired 20,000 workers, down slightly from 23,000 the previous month.