U.S. Economy May Be Stuck In Slow Lane For Long Run 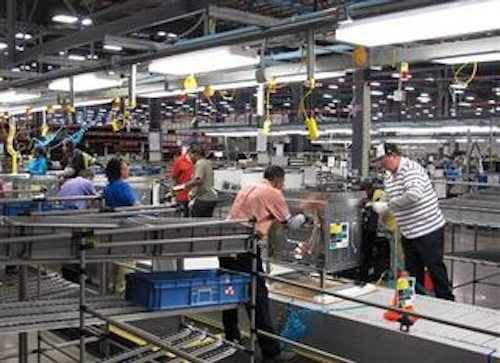 WASHINGTON (AP) -- In the 4 1/2 years since the Great Recession ended, millions of Americans who have gone without jobs or raises have found themselves wondering something about the economic recovery: Is this as good as it gets?

It increasingly looks that way.

Some long-term trends are equally dispiriting.

The Congressional Budget Office foresees growth picking up through 2016, only to weaken starting in 2017. By the CBO's reckoning, the economy will soon slam into a demographic wall: The vast baby boom generation will retire. Their exodus will shrink the share of Americans who are working, which will hamper the economy's ability to accelerate.

At the same time, the government may have to borrow more, raise taxes or cut spending to support Social Security and Medicare for those retirees.

Only a few weeks ago, at least the short-term view looked brighter. Entering 2014, many economists predicted growth would top 3 percent for the first time since 2005. That pace would bring the U.S. economy near its average post-World War II annual growth rate. Some of the expected improvement would come from the government exerting less drag on the economy this year after having slashed spending and raised taxes in 2013.

In addition, steady job gains dating back to 2010 should unleash more consumer spending. Each of the 7.8 million jobs that have been added provided income to someone who previously had little or none. It amounts to "adrenaline" for the economy, said Carl Tannenbaum, chief economist for Northern Trust.

And since 70 percent of the economy flows from consumers, their increased spending would be expected to drive stronger hiring and growth.

"There is a dividing line between a slow-growth economy that is not satisfactory and above-trend growth with a tide strong enough to lift all the boats and put people back to work," said Chris Rupkey, chief financial economist at Bank of Tokyo-Mitsubishi. "That number is 3 percent."

The recovery had appeared to achieve a breakthrough in the final quarter of 2013. The economy grew at an annual pace of 3.2 percent last quarter. Leading the upswing was a 3.3 percent surge in the rate of consumer spending, which had been slack for much of the recovery partly because of high debt loads and stagnant pay.

Yet for now, winter storms and freezing temperatures, along with struggles in Europe and Asia, have slowed manufacturing and the pace of hiring.

Just 113,000 jobs were added in January, the government said Friday. In December, employers had added a puny 75,000. Job creation for the past two months is roughly half its average for the past two years. A third sluggish jobs report in February would further dim hopes for a breakout year.

"Three months in a row would mean the job market is taking a turn for the worst," said Stuart Hoffman, chief economist for PNC Financial Services.

Former Treasury Secretary Larry Summers and Nobel Prize winner Paul Krugman have suggested that the economy might be in a semi-permanent funk. In November, Summers warned in a speech that the economy is trapped by "secular stagnation." By that, he meant a prolonged period of weak demand and slow growth.

If the United States hasn't already slipped into that period, the CBO predicts it could over the next four years. That's when the retirements of baby boomers would start to restrain growth.

The economy will expand 2.7 percent in 2017 before declining to an average of 2.2 percent through 2024, the CBO estimates. That's about as sluggish as the current recovery has been, on average, so far.

There are no documented examples of an economy that had to emerge from a financial crisis while simultaneously absorbing the effects of an aging population, noted Harvard University economist Carmen Reinhart, who has researched eight centuries of crises with her colleague Ken Rogoff.

"These things are new," she said.

Many Americans who endured the worst of the downturn remain wary, sensing that the recession caused an enduring downshift. Some businesses are still reluctant to hire despite higher revenue.

Consider Linda Tool & Die in Brooklyn. The company slashed its average workweek to 32 hours after the recession struck. Those cuts helped preserve employees' health care benefits. It also enabled the 61-year old company to invest in technology to try to stay competitive in a tough environment.

But as business has improved with more orders from aerospace companies, CEO Mike Dimarino has chosen overtime over hiring.

"I'd rather give the people who stuck with me during the dark days a few extra bucks," he said.

Likewise, some people have downshifted to careers they view as better safeguards against a downturn. One is Phillip Romine, 28, who said he now prizes job security over the allure of overtime pay.

Before being laid off by General Motors in 2009, Romine had been building Chevy and Pontiac sedans in Michigan.

Many months after his layoff, GM offered to rehire Romine. His answer? No thanks. Romine chose to stay in school and complete his associate's degree.

Now a physical therapist, he finds fulfillment in serving people. Yet he feels his generation may never match his parents' lifestyle. His father's GM factory pay was enough to buy a home on several acres with a swimming pool — something Romine regards as a fantasy for him and his generation.

"I feel like right now I'm maintaining," he said.

An economy that grew faster than 3 percent would likely make it easier for the 3.6 million other Americans who have gone without a job for more than six months to find work.

By his own count, Brian Perry has applied for nearly 1,500 jobs since being let go as a law clerk in 2008. The 56-year old Perry lives in Rhode Island, where the 9.1 percent unemployment rate is 2.5 percentage points above the national average.

Perry remains optimistic that a job is forthcoming. He thinks a more robust economy would create better opportunities for the long-term unemployed like him.

The weakness of the recovery stems in part from the usual lingering hangover from financial crises, according to research by Harvard's Reinhart and Rogoff. Their research shows that it takes a decade to fully heal. Last month, they released a paper suggesting that the U.S. economy has actually fared well during this recovery compared with other economies that have suffered a financial crisis.

And Reinhart noted that their records show no precedent for an economy that emerged from a financial crisis while facing a profound demographic shift.

She does offer a smidgen of optimism: History suggests that economies that seem doomed can sometimes enjoy sudden turnarounds and unexpected bursts of energy. American consumers were walloped by high gasoline prices and low growth in the 1970s. Yet the feared downward spiral never happened as the economy roared through the 1980s.

"Financial crises do not last forever," Reinhart said. "A decade is a long time. But a long time is not the same as forever."

Apple Said To Take $14B Bite Of Stock Via Buyback