U.S. manufacturers have grown more competitive over the past decade compared with factories in China, Brazil and most of the world's other major economies. 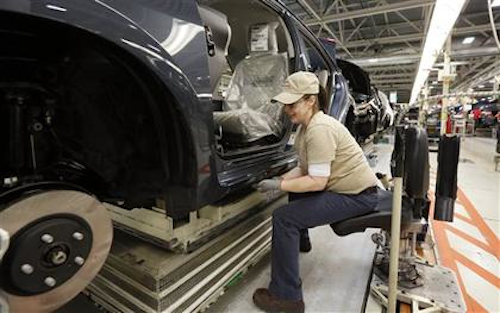 WASHINGTON (AP) -- U.S. manufacturers have grown more competitive over the past decade compared with factories in China, Brazil and most of the world's other major economies.

So says a new private study, which found that rising wages and higher energy costs have diminished China's long-standing edge over the United States. So has a boom in U.S. shale gas production. It's reduced U.S. natural gas prices and slowed the cost of electricity.

The Boston Consulting Group is issuing a report Friday on its study of manufacturing costs in the 25 biggest exporting countries. Only seven of those countries had lower manufacturing costs than the United States did this year. And since 2004, U.S. manufacturers have improved their competitiveness compared with every major exporter except India, Mexico and the Netherlands.

In 2004, for example, manufacturing in China cost 14 percent less than manufacturing in the United States. By this year, the China advantage had narrowed to 5 percent. If the trends continue, Boston Consulting found, U.S. manufacturing will be less expensive than China's by 2018.

Over the past decade, labor costs, adjusted to reflect productivity gains, shot up 187 percent at factories in China, compared with 27 percent in the United States. The value of China's currency has risen more than 30 percent against the U.S. dollar over the past decade.

China, too, has reserves for shale gas. But it will need years to develop them.

"This is not something you can turn on overnight," said Justin Rose, a partner at Boston Consulting and co-author of the study.

Brazil has lost even more ground than China. In 2004, manufacturing was 3 percent cheaper in Brazil than in the United States. By 2014, Brazil was 23 percent more expensive. Brazilian factories didn't improve efficiency enough to offset rising energy and labor costs.

The countries where manufacturing was cheaper than in the United States are Indonesia, India, Mexico, Thailand, China, Taiwan and Russia.

Australia was the most expensive country for manufacturing. Its costs were 30 percent higher than those in the United States.

The survey doesn't include transportation costs, which vary depending on where goods are shipped. Several countries also face obstacles not captured by Boston Consulting's manufacturing cost index — from corruption to inefficient government bureaucracies.