Watched over by riot police, hundreds of Chinese workers left Vietnam on Monday on ships chartered by their government after deadly unrest broke out last week amid a dispute over sovereignty claims in the South China Sea. 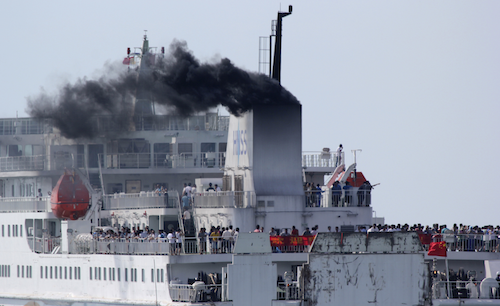 VUNG ANG, Vietnam (AP) — Watched over by riot police, hundreds of Chinese workers left Vietnam on Monday on ships chartered by their government after deadly unrest broke out last week amid a dispute over sovereignty claims in the South China Sea.

The decision to evacuate workers by sea will play well in China, where the government is under pressure to look after its citizens abroad.

Some saw possible geopolitical reasons behind the dramatic gesture, suggesting that by deploying the ships China was trying to reinforce the image of it as a victim as it battles mostly negative international opinion over its increasingly assertive moves in the South China Sea.

Two ships arrived at Vung Ang port early Monday morning and left after taking aboard around 900 people each, according to an Associated Press reporter outside the facility and government official Thai Tran Linh in Ha Tinh. The workers were bused to the ships, where riot police were stationed.

Vung Ang port is part of a large, under-construction Taiwanese steel mill complex 350 kilometers (217 miles) south of Hanoi that was overrun by an anti-China mob on Wednesday and Thursday. Two Chinese workers were killed and 140 injured in the attack, which also left parts of the facility on fire. Linh said around 3,000 Chinese workers were employed constructing the complex.

China's Foreign Ministry spokesman Hong Lei said the government had sent four vessels capable of carrying a total of 4,000 people to the Vietnamese port of Vung Ang. Chinese nationals injured in the protests and some others have been flown home, he said.

"The Chinese government is highly concerned about the safety of Chinese citizens in Vietnam," Hong said.

China and Vietnam each have overlapping territorial claims in the South China Sea that have triggered tensions for years. The latest round erupted May 1 when Beijing deployed a large oil rig close to the Paracel Islands, which are controlled by China but claimed by Vietnam. Hanoi immediately sent ships to confront the rig. They are now locked in a standoff with Chinese ships protecting the rig, raising fears of possible conflict.

One man in Vung Ang said Chinese workers and Vietnamese ones in the town had a history of fighting with each that long predated the oil rig standoff, often when drunk.

"When the Chinese workers were living here there were clashes ever week. I'm happy they are leaving," said the man, who gave his name only as Thuan and was drinking a beer near the port. "Maybe there will be better security and public order now for the community."

Vietnam has been trying to rally international support for its stance. The United States has labelled China's move as provocative.

There has been no violence or protests since last Thursday. Chinese people wishing to have been able to leave the country independently with no impediments since then.

While noting that countries are obligated to help their citizens, Jonathan London, a Vietnam expert at Hong Kong's City University, said sending ships "broadcasts to the world a sense that China is a victim, creates an image of a destabilized Vietnam (and) sends ominous signals and veiled threats of punitive action."

"This maneuver might be perceived as indicating that (Chinese President Xi Jinping) is more interested in deepening rather than alleviating the prevailing sense of crisis which, if true, does not bode well for those hoping for de-escalation and newly-imaginative attempts at conflict resolution," he wrote in an email.

Around 400 other factories around the country were damaged or destroyed in mob violence, most in industrial parks close to southern Ho Chi Minh City. Many factories were not Chinese-run but Taiwanese or from elsewhere in Asia, apparently targeted mistakenly or by gangs intent on looting.

Vietnam's government, furious at China's positioning of the rig, initially allowed street protests, a rarity in the authoritarian country. But since the rioting they have cracked down, aware that the violence threatened the country's reputation as a safe and cheap destination for foreign manufacturers to establish.