Chinese authorities are investigating a company that researchers say sold North Korea materials that can be used by its growing nuclear weapons program in a crackdown that reflects Beijing's growing frustration with its isolated neighbor. 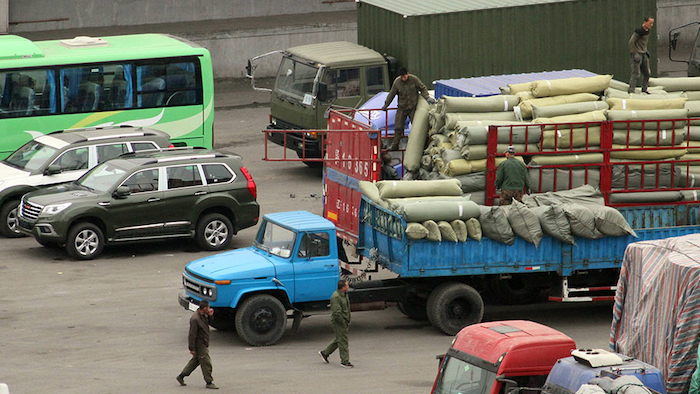 BEIJING (AP) — Chinese authorities are investigating a company that researchers say sold North Korea materials that can be used by its growing nuclear weapons program in a crackdown that reflects Beijing's growing frustration with its isolated neighbor.

The announcement about Hongxiang Industrial Development Co. in Dandong, a northeastern border city in Liaoning province, was unusually explicit for Beijing, whose dealings with the North are shrouded in secrecy.

Hongxiang is suspected of unspecified "serious economic crimes," according to separate announcements by police in Liaoning and China's foreign ministry. They gave no details but a South Korean think tank said last month it supplied aluminum oxide and other materials that are used in processing nuclear bomb fuel.

Beijing has long been North Korea's main source of aid and diplomatic support but President Xi Jinping's government is showing growing frustration with Pyongyang's pursuit of nuclear weapons in defiance of foreign pressure.

China signed on in March to U.N. sanctions that limit trade with the North and has tightened controls on cross-border flows of goods. Security Council resolutions prohibit nuclear weapons development by the North and all ballistic missile activity.

The government of North Korean leader Kim Jong Un conducted its fifth nuclear test on Sept. 9. That raised concern abroad it was moving closer to its goal of a nuclear-armed missile that could one day strike the U.S. mainland.

"Although It is rare for China to announce the punishment of its own companies, it shows the firm determination to implement relevant U.N. resolutions," said Lu.

Ma founded Hongxiang in 2000 and the company has expanded into trade, hotels and tourism.

Washington has pressed Beijing to lean harder on Pyongyang, but Chinese leaders have resisted for fear of destabilizing Kim's government and setting off a flood of refugees or a political collapse that might lead to U.S. and South Korean troops being stationed in the North near China's border.

In April, China banned imports of North Korean coal and iron ore, an important revenue source for the impoverished country. Beijing also banned sales of jet fuel to the North, though it said civilian aircraft would be allowed to refuel on flights to China.

That was followed in June by a ban on exports to the North of "dual use" items with possible civilian and military applications including metal alloys, cutting and laser-welding equipment and materials that could be used in production of chemical weapons.

Tungsten trioxide can be used in making more aerodynamically stable missiles, while aluminum oxide is used to resist corrosion in gas centrifuges during uranium enrichment, according to Asan. It said those could qualify as "potential military and nuclear dual use products" under U.S. Department of Commerce restrictions.

Hongxiang is one of the biggest traders with North Korea and carried out imports and exports worth a total of $532 million in 2011-15, said the report.

Companies affiliated with it also helped to maintain North Korea's cyber infrastructure and traded with entities in Myanmar that also are subject to international sanctions, Asan said.

There was no indication why the large scale of Hongxiang's trade failed to attract official attention earlier.