U.S. Trade Deficit Widens In May As Exports Struggle

The U.S. trade deficit widened slightly in May, reflecting declines in sales of American-made aircraft and machinery as exports continued to suffer from a strong dollar. 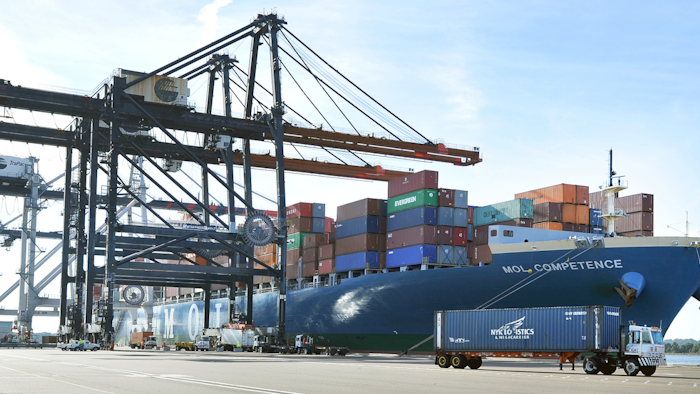 WASHINGTON (AP) — The U.S. trade deficit widened slightly in May, reflecting declines in sales of American-made aircraft and machinery as exports continued to suffer from a strong dollar.

The deficit increased 2.9 percent to $41.9 billion in May, up from an April imbalance of $40.7 billion, the Commerce Department reported Tuesday.

Imports fell 0.1 percent to $230.5 billion. Exports slid at a faster pace of 0.8 percent to $188.6 billion. American producers have been hurt this year by a rising value of the dollar, which makes U.S. goods less competitive in overseas markets.

Even with the slight rise in May, the deficit over the past two months is averaging less than in the first quarter. That should help boost growth in the second quarter.

Trade slashed nearly 2 percentage points off growth during the first three months of the year. The big drag from trade combined with an unusually severe winter sent the economy into reverse, contracting at an annual rate of 0.2 percent in the January-March period.

Analysts believe that a narrowing of the trade deficit in the April-June period will be a major factor in reviving overall growth. They forecast a rebound to an annual growth rate of around 2.5 percent, as measured by the gross domestic product, in the second quarter.

Analysts think going forward, solid job gains will bolster GDP growth even more in the second half of this year to around 3 percent.

The deficit with China jumped 15 percent in May to $30.5 billion. So far this year, it is running 11.1 percent higher than the same period a year ago, putting the country on track to hit another annual record. America's trade deficit with China is the largest with any country.

In May, the United States ran a rare trade surplus with its biggest trading partner, Canada. The $644 million surplus was the first monthly surplus with Canada going back to 1990.

President Barack Obama won a hard-fought trade victory last month when Congress finally passed the fast-track legislation he needed to wrap up negotiations on a trade agreement with 11 Pacific nations. The fast-track process will require Congress to approve or reject the deal under expedited procedures that do not allow for amendments.

Obama, who bucked many Democrats to win approval, said the 12-nation Trans-Pacific Partnership trade agreement, which the administration hopes to complete soon, will be good for American workers and businesses by opening up export opportunities for U.S. companies.

Critics say the legislation Obama signed into law on June 29 did not go far enough to ensure strong enforcement of labor and environmental standards and will not hold countries responsible if they manipulate their currency to gain unfair trade advantages.