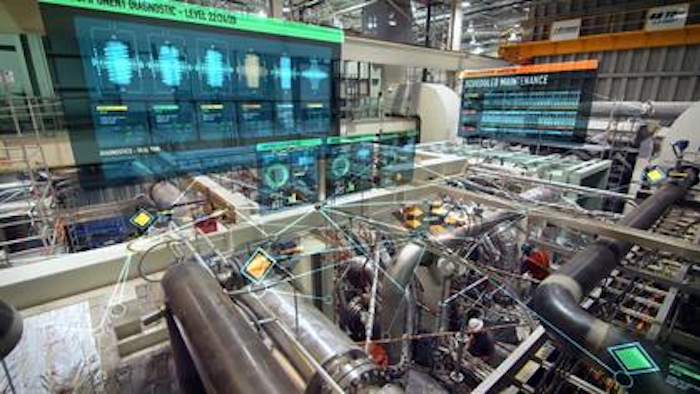 Like an industrial cathedral, a power plant can be a placed filled with a special kind of serenity. Walk into the pump room that feeds high-pressure steam into turbines that make electricity and you can see sun dancing on aluminum ducts while the pumps hum to the tune of 800 horsepower.

But on this day, all is not as it seems. Sure, technicians move around purposefully, performing their normal tasks. Valves open in the right sequence like pipes on an organ. Even trained eyes can’t see anything amiss. But back in the control room, a warning box pops up on the plant operator’s screen.

It’s the data talking. The plant’s engineers recently installed new vibration sensors on the pumps and they just detected a slight movement that wasn’t there yesterday or the week before. The sensors streamed the data to the control room’s computer, which analyzed it and flagged an anomaly for review. Next, the software automatically took another look at data coming from a temperature sensor, confirmed the finding and reported that things had not yet gone too far out of whack for major damage to have occurred.

And just like that, unlike in the plot of a Hollywood thriller, everything got quietly resolved. The system prompted the operator to record the anomaly for the maintenance crew, who inspected the pump and saw that anchoring screws had come loose. A few turns of the wrench avoided a situation.

For now, this scenario is still largely hypothetical. But things are changing quickly. On Tuesday at its Minds + Machines conference in San Francisco, GE unveiled the first “digital power plant” – a new design that can seamlessly integrate data from assets inside the power station and make it run more efficiently.

The digital power plant will make such installations smart by connecting them to the Industrial Internet and outfitting them with sensors that can measure pressure, temperature, vibration, environmental variables and many other conditions. The system, which is built on Predix, GE’s industrial software platform, can analyze the data to optimize the plants and spot problems before they get out of hand.

Predix will also allow utilities to write their own apps to monitor and control their plants even from a smartphone.

But the Industrial Internet isn’t the only technology behind the digital power plant. The supply of electricity to homes and businesses is shifting from the old model of a single, distant plant making and transmitting power one way to consumers to a more flexible, two-way system, where roof-mounted solar panels, wind farms and batteries bring renewable but still unpredictable power to the grid.

The industry needs tools to manage this shift and data and software might just do the trick. It can tell the best time to reduce the output of a gas-fired power plant and replace it with power made by wind, which just started blowing, or the sun, which just came out.

Ganesh Bell, chief digital officer at GE Power & Water – the first digital officer in GE’s 130-year history – says that the world will need find a way to generate 50 percent more electricity in the next two decades. “This is a huge challenge and nobody no matter how large can succeed in doing it alone,” he says. “That’s why we invite customers, partners, startups and others to join us and innovate on our Predix software platform and solve it together.”

Exelon and PSEG are among the first utilities to digitize their power plants to deploy apps and to improve assets and operations.

Mike Kurzeja, senior manager for emerging technologies at Exelon, one of the largest American energy generation and distribution companies, says that in order maintain Exelon’s place in the industry and also to thrive, “we have to look to innovation for opportunities in efficiency and growth.”