The developer of the Dakota Access oil pipeline is battling to avoid dismissal of a second defendant in its federal racketeering lawsuit against three environmental groups. 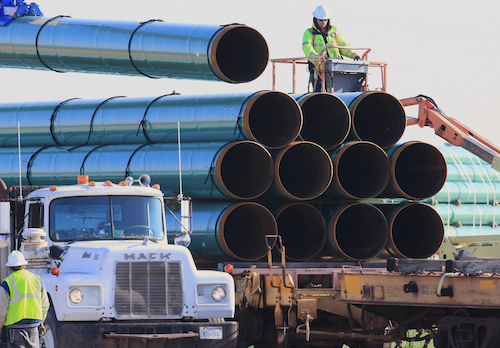 BISMARCK, N.D. (AP) — The developer of the Dakota Access oil pipeline is battling to avoid dismissal of a second defendant in its federal racketeering lawsuit against three environmental groups.

Attorneys for Texas-based Energy Transfer Partners argue in court documents filed Wednesday that Earth First should be held accountable for "eco-terrorist activities" because it's a legal entity that can be sued, and that the company at the very least should be able to add a publication associated with it as a defendant.

ETP sued Earth First, Greenpeace and BankTrack last August for up to $1 billion, alleging they worked to undermine the $3.8 billion pipeline that's now moving oil from North Dakota to Illinois. The groups said the lawsuit was an attack on free speech.

The Center for Constitutional Rights also maintains Earth First is an unstructured social movement or philosophy, similar to Black Lives Matter, and can't be sued. ETP tried to serve the lawsuit on Earth First Journal, but the Florida-based environmental publication effectively argued it was not the same as the movement.

U.S. District Judge Billy Roy Wilson late last month ordered ETP to show why he shouldn't dismiss Earth First from the lawsuit. The order came the day before he dismissed Netherlands-based BankTrack as a defendant, ruling that group's urging of banks not to finance the pipeline wasn't a violation of the Racketeer Influenced and Corrupt Organizations Act.

That left Earth First and Greenpeace as the remaining defendants, though Wilson called the allegations against Greenpeace vague and ordered ETP to file an amended complaint with more details. That document is pending.

ETP maintains in the document it filed Wednesday that Earth First is an established group that raises money for a particular purpose, with "members, leaders and decision-making processes." It also contends Earth First Journal is "the agent of Earth First" and says it served the vice president of the journal's publishing company with the lawsuit on July 27.

"Nevertheless, it self-servingly characterizes itself as a 'philosophy,' has deliberately failed to incorporate, and denies its existence to authorities, so as to frustrate legal process and avoid liability for the harm caused by its eco-terrorist activities," attorney Lauren Tabaksblat wrote.

If the judge continues to disagree, she wrote, ETP should at least be given permission to gather more evidence to prove its case, or to add the journal as a defendant.

The Center for Constitutional Rights did not immediately file a response with the court or respond to an Associated Press request for comment.