Hershey Dips Into Meat Market with Purchase of Krave Jerky

The maker of treats like Reese's, Kit Kat and Twizzlers says it's buying Krave Jerky for an undisclosed sum. Krave, based in Sonoma, California, positions itself as a premium jerky with no artificial ingredients and comes in flavors like black cherry barbecue, basil citrus and lemon garlic. 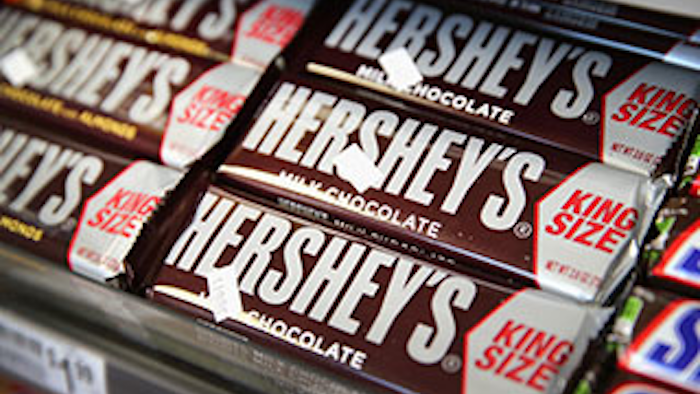 NEW YORK (AP) — Hershey has a sudden hankering for protein, with plans to add jerky to its lineup.

The maker of sugar-high inducing treats like Reese's, Kit Kat and Twizzlers says it's buying Krave Jerky for an undisclosed sum. Krave, based in Sonoma, California, positions itself as a premium jerky with no artificial ingredients and comes in flavors like black cherry barbecue, basil citrus and lemon garlic.

Michele Buck, president of Hershey North America, said in a phone interview with The Associated Press that the company plans to continue expanding its offerings across the "snacking continuum" through acquisitions and in-house development. While The Hershey Co. is already strong player in sweet treats, the Krave deal is intended to give it a foothold in snacks people see as healthy fuel.

The push to expand beyond impulsive sweets comes as Americans' addiction to snacking grows. Rather than sticking to three meals a day, people are increasingly grazing on smaller bites around the clock. The trend has prompted Dunkin' Donuts to position its fried-chicken sandwiches as snacks, and Taco Bell to introduce a "Happier Hour" for people looking for a late afternoon pick-me-up.

In the packaged food universe, the nation's snacking habit is blurring the lines between what qualifies as an indulgence versus nourishing fuel, prompting food makers to market snacks with nutritional benefits like fiber. Protein in particular has become a desirable ingredient, which in turn has helped boost jerky sales.

"We know consumers have an interest in portable and protein-based nutrition," Buck said.

Last year, jerky sales in the U.S. totaled $1.41 billion, according IRI, a Chicago-based market researcher. That's up 13 percent from 2013 and 22 percent from 2012. Meanwhile, Hershey on Thursday reported fourth-quarter sales and profit that missed Wall Street expectations and lowered its earnings and revenue outlook for the year.

In a note to investors, J.P. Morgan analyst Ken Goldman wrote that the Krave deal "perhaps indicates that Hershey is less enamored of candy's growth potential than it previously was." He noted that indulgent snacks like chocolates and cookies generally underperformed categories like trail mixes, nuts and meat snacks.

Jon Sebastiani, who founded Krave in 2009, sees even more growth potential for the jerky market by improving the category's image. As such, Krave notes that its products do not contain nitrates or artificial flavors, and that they're lower in salt and cholesterol than competing jerkies.

"It's very inviting to a female consumer," Sebastiani said.

Sebastiani, who will continue to lead the unit and report to Buck, said sales for Krave Jerky have been growing at triple digit rates. Last year, he said sales totaled $36 million. The company's offerings are expanding, too.

Capitalizing on the desire for protein, Sebastiani said Krave plans to launch a "meat bar" later this year to compete with granola bars found near supermarket checkout aisles.

As for any potential pairings between Krave and Hershey products, Buck said there are no plans but didn't rule out the possibility.

"Who knows what will come down the pike?" she said.