Proposed Standards Aim to Cut Down on Salmonella in Poultry

The proposed standards apply to the most popular poultry products — chicken breasts, legs and wings, and ground chicken and turkey. They are voluntary but designed to pressure companies to lower rates of salmonella and campylobacter, another pathogen that can cause symptoms similar to salmonella, in their products. 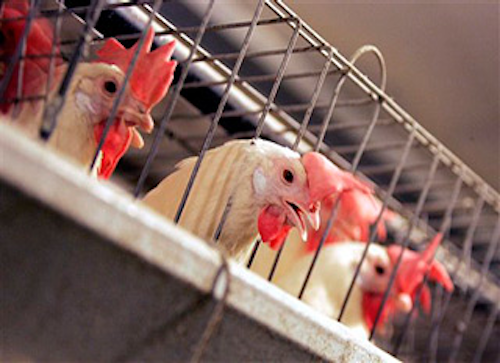 WASHINGTON (AP) — The government is pushing the poultry industry to make their chicken and turkey a little safer with new standards aimed at reducing the number of cases of foodborne illness by 50,000 a year.

The proposed standards announced Wednesday by the Agriculture Department apply to the most popular poultry products — chicken breasts, legs and wings, and ground chicken and turkey. They are voluntary but designed to pressure companies to lower rates of salmonella and campylobacter, another pathogen that can cause symptoms similar to salmonella, in their products.

Among the measures companies could take to reduce the rates of those pathogens: better screening of flocks and better sanitation.

The Agriculture Department says the standards could eventually reduce salmonella and campylobacter illnesses linked to raw poultry by about a quarter, or 50,000 illnesses a year.

"We are taking specific aim at making the poultry items that Americans most often purchase safer to eat," said Agriculture Secretary Tom Vilsack.

Foster Farms took measures to improve its sanitation and screening, and the Centers for Disease Control and Prevention now says the company's products have less than 5 percent salmonella.

Vilsack said the Foster Farms outbreaks led the department to realize it needed to be more focused on reducing salmonella in chicken parts. The department already had standards in place for whole carcasses, but not individual parts like breasts and wings. The new proposal would cover the parts, about 80 percent of chicken available for purchase.

The secretary said companies should realize that complying is good business. "It's in the long-term best interest of the market to have safer food," Vilsack said.

Consumer advocates have lobbied for more stringent standards, saying the sale of raw poultry contaminated with salmonella should be illegal. Current law allows raw poultry to have a certain amount of salmonella because it is so prevalent and is killed if consumers handle and cook the meat properly.

By comparison, it is currently illegal to sell meat contaminated with E. coli, which can cause severe illness or death.

Around a million Americans get sick from salmonella every year, and almost 20 percent of those illnesses are linked to chicken and turkey.

The salmonella rates are measured by taking poultry samples at plants. USDA said the agency would make public which companies are meeting the standards or going beyond them, and which companies have more work to do, giving companies more incentive to comply.

Salmonella causes diarrhea, abdominal cramps and fever within a few days of eating a contaminated product, and can be life-threatening to those with weakened immune systems. The symptoms for campylobacter infections are similar.

To avoid getting sick, the government advises that you wash your hands, utensils, counters and cutting boards before and after they come in contact with poultry. Separate raw poultry from other foods, cook it to 165 degrees Fahrenheit as measured with a food thermometer and chill it promptly.