Don't go chomping on a handful of chili peppers just yet, but there may be help for hopeful dieters in those fiery Native American fruits. Researchers have found promise in the potential of capsaicin — the chief ingredient in chili peppers — as a diet-based supplement. 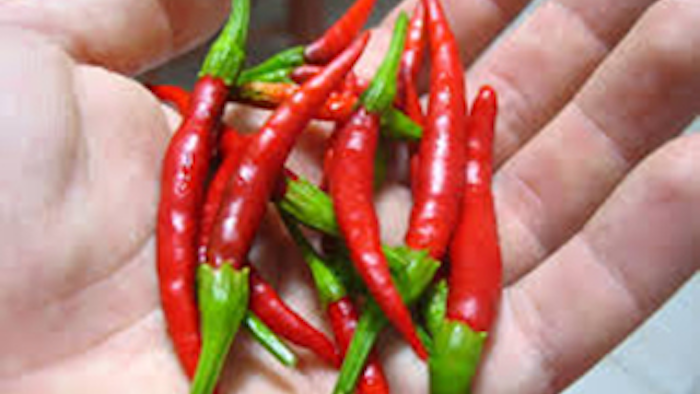 WASHINGTON, D.C. — Don't go chomping on a handful of chili peppers just yet, but there may be help for hopeful dieters in those fiery little Native American fruits.

A large percentage of the world's population — fully one third, by the World Health Organization's estimates — is currently overweight or obese. This staggering statistics has made finding ways to address obesity a top priority for many scientists around the globe, and now a group of researchers at the University of Wyoming has found promise in the potential of capsaicin — the chief ingredient in chili peppers — as a diet-based supplement.

The temptation to eat fatty foods is often so strong that, for many, it can override or overpower any dietary restrictions. As a solution to this problem, a group of researchers at the University of Wyoming developed a novel approach to stimulate energy metabolism--without the need to restrict calorie intake.

During the Biophysical Society's 59th Annual Meeting in Baltimore, Md., Feb. 7-11, 2015, the researchers from the laboratory of Dr. Baskaran Thyagarajan, University of Wyoming will describe how dietary capsaicin may stimulate thermogenesis and energy burning by activating its receptors, which are expressed in white and brown fat cells. This may help to prevent and manage obesity and other related health complications such as Type 2 diabetes, high blood pressure, and cardiovascular diseases -- though this effect has not yet been demonstrated in carefully-controlled clinical trials.

"Obesity is caused by an imbalance between calorie intake and energy dissipation," explained Vivek Krishnan, a graduate student working in Baskaran Thyagarajan's laboratory at the University of Wyoming's School of Pharmacy -- a research group known as "Baskilab."

"In our bodies, white fat cells store energy and brown fat cells serve as thermogenic (heat produced by burning fat) machinery to burn stored fat. Eating calorie-rich food and a lack of physical activity cause an imbalance in metabolism that leads to obesity."

Baskilab has found that high-fat-diet obesity and dietary capsaicin -- 0.01 percent of capsaicin in the total high fat diet -- prevented high-fat-diet-induced weight gain in trials with wild type mice, but not in mice that genetically lacked TRPV1.

Further, dietary capsaicin didn't modify food or water intake in these mice, "although it did significantly increase the metabolic activity and energy expenditure in wild type mice fed a high-fat diet, "but not for mice that genetically lack TRPV1" Krishnan noted.

So, Baskilab's overarching hypothesis is that dietary capsaicin induces browning of white adipose tissue and stimulates thermogenesis to counteract obesity. "The main goal of our work is to expand the knowledge of the mechanism by which capsaicin antagonizes obesity, as well as to advance the proof of principle of the anti-obesity potential of dietary capsaicin. Next, we'll focus on our longer-term goal of developing TRPV1 agonists as new drug molecules to prevent and treat obesity," said researchers from Baskilab.

Developing a natural dietary supplement as a strategy to combat obesity can be easily advanced to human clinical trials, according to the researchers. "We envision a nanoparticle-based sustained-release formulation of capsaicin, which is currently under development in our laboratory," added researchers from Baskilab. "In turn, this will advance a novel dietary supplement-based approach to prevent and treat one of the life-threatening diseases, obesity and its associated complications -- in humans."

The group's strategy to counteract obesity is expected to form a major focus of future healthcare priorities for both the National Institutes of Health and Department of Defense.

Baskilab has already submitted a patent application for the drug delivery aspect of the discovery.

The poster #B399, "Dietary capsaicin and exercise: analysis of a two-pronged approach to counteract obesity" by Vivek Krishnan, Kevin Fettel and Baskaran Thyagarajan, will be in a poster session beginning at 1:45 p.m. on Sunday, February 8, 2015 in Hall C of the Baltimore Convention Center. ABSTRACT

About the Society
The Biophysical Society, founded in 1958, is a professional, scientific Society established to encourage development and dissemination of knowledge in biophysics. The Society promotes growth in this expanding field through its annual meeting, bi-monthly journal, and committee and outreach activities. Its 9,000 members are located throughout the U.S. and the world, where they teach and conduct research in colleges, universities, laboratories, government agencies, and industry. For more information on the Society, or the 2015 Annual Meeting, visit http://www.biophysics.org