Americans' growing taste for more unusual fare has contributed to a steady increase in demand for goat products in recent years, and producers across the country are trying to determine how to secure enough milk to give consumers what they want. 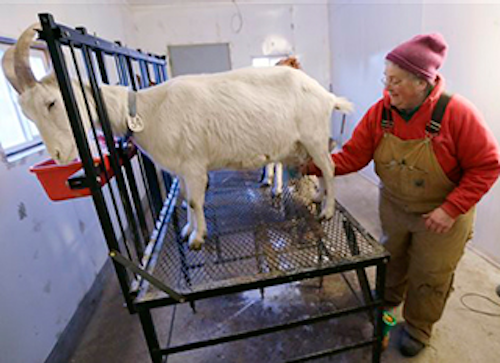 MADRID, Iowa (AP) — Buying two goats in August 2008 was little more than an experiment for farmer Paula Olson and some entertainment for her daughters.

Six and a half years, 14 milking goats and roughly $300,000 later, she's in the midst of constructing a small-scale creamery in Madrid, Iowa, that's set to feature goat milk, cheese, ice cream and more. And though her creamery isn't yet open, Olson said local businesses have begun inquiring about her products, prompting her to already consider expanding.

Americans' growing taste for more unusual fare has contributed to a steady increase in demand for goat products in recent years, and producers across the country are trying to determine how to secure enough milk to give consumers what they want while continuing to develop their merchandise.

The nation's dairy goat herd climbed 2 percent in the past year to 365,000 animals, but producers said their annual sales are rising even faster — up by 15 percent or more. In Iowa, the number of goat farms has climbed from less than 20 a decade ago to about 200, behind only Wisconsin and California.

Sheep and goat milk accrued $92.2 million in sales in 2012, according to the most recent figures available from the U.S. Agriculture Department's census, with combined sales about a third higher than in the previous 2007 census.

Goat dairies remain a relatively new market, however, so those in the industry are trying out new techniques largely by trial and error.

"It's not like the cow world," said Larry Hedrich, owner of LaClare Family Farm in Chilton, Wisconsin. "There aren't reams and reams of research available."

Shelby Cornelius, president of the Iowa Dairy Goat Association, said membership has doubled since he took over in 2013 as farmers search for guidance in how to get the most from their goats. The association has provided information on topics ranging from cheese-making to artificial insemination, he said.

Much of the new demand appears to be due to increased interest in artisan cheeses and populations that are more accustomed to goat milk, such as Hispanic and Jewish communities, Cornelius said. In much of the world, goat milk is more common than cow milk.

"As time goes on, goats won't surpass dairy cattle, but I think they're going to become more competitive," Cornelius said.

Some believe goat milk has significantly greater health benefits than cow milk, but Leo Timms, a professor in Iowa State University's Department of Animal Science, said the two are quite similar.

The most notable difference, he said, is that goat milk is naturally homogenized, meaning the fat globules in the liquid have already been broken up so they're digestible, whereas cow milk homogenization must be simulated. Proteins in the milks also differ, so someone who is allergic to cow milk might be able to drink goat milk, though lactose is still present in goat's milk.

Another distinguishing factor is in milk production — dairy cows produce about 20,000 more pounds of milk annually than goats.

Cow milk accounted for nearly 95 percent of milk consumption in 2014, compared to 0.02 percent for goat milk, according to a statement from Dairy Management, Inc., which collects money from the nation's approximately 47,000 cattle dairy farmers for product promotion.

Still, goat products serve a niche in the dairy market. Jennifer Bice, founder of Redwood Farms in Sebastopol, California, has been in the dairy goat business for 45 years and witnessed the changing industry.

Besides an interest in traditional dairy alternatives, many people favor goat milk because they think it has a lower environmental impact, Bice said, attributing it to the fact that goats aren't factory-farmed like cattle and produce less manure.

The increasing popularity of natural foods also has aided demand for products such as Redwood's goat milk yogurt; Bice's company, which complies with various organic standards, contracts with several grocery stores and restaurants that emphasize organics.

As goat farmers continue to grapple with best methods and test new products, Bice said she expects interest to only grow. "I don't see any reason for it to stop," she said.