Arguments of choice versus public safety are heated in a fight over whether to let Louisiana farmers sell raw milk. The full state House will consider a bill that would allow sales of unpasteurized milk, after it was advanced in a 9-6 vote Thursday by the House Agriculture Committee. 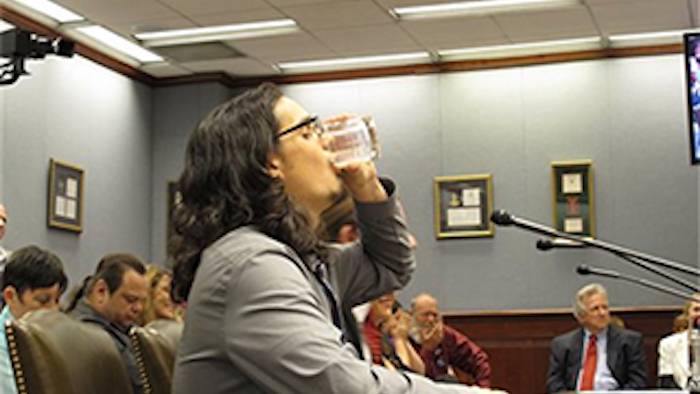 BATON ROUGE, La. (AP) — Arguments of choice versus public safety are heated in a fight about whether to let Louisiana farmers sell raw milk to the public.

The full state House will consider a bill that would allow sales of unpasteurized milk, after it was advanced in a 9-6 vote Thursday by the House Agriculture Committee.

Supporters of raw milk say pasteurization takes away some of milk's nutritional benefits.

"We should have the freedom to decide what to feed ourselves and our families," said Audry Salvador, of Sulphur, describing the measure as helping small farmers and rural economies.

Rep. Robert Johnson, D-Marksville, questioned why the bill would absolve farmers of liability if a safety problem develops.

"They made that choice when they go to the farmer," Ortego said.

Johnson replied: "Why are we doing that if this is so safe?"

Rep. Simone Champagne, a supporter of the bill, said she enjoys raw oysters, and she noted that they come with a disclaimer about people eating at their own risk.

"I don't really see a difference, in my opinion, between the two," said Champagne, R-Erath.

The U.S. Food and Drug Administration doesn't allow the sale of unpasteurized milk for human consumption, so raw milk cannot be sold across state lines. The FDA warns that "raw milk can harbor dangerous microorganisms that can pose serious health risks."

Thirty states allow people to buy raw milk, according to the National Conference of State Legislatures. The laws vary on where and how it can be sold.

Danahay said the proposed change for Louisiana would allow people to buy raw milk directly from a farmer, not at a grocery store.

The point of sale must carry a sign that includes a statement warning that the milk has not been pasteurized, that the farm and the milk haven't been inspected by the state and that the buyer assumes all liability for health risks.

"I would no more ask my granddaughters to drink raw milk because it is like playing Russian roulette with them," she said.