What's an Oktoberfest with no beer? The Utah Oktoberfest festival, held at the Snowbird Ski Resort, may not have the permit to serve alcohol this year. The Utah liquor commission is trying to reevaluate who should be approved for alcohol permits. 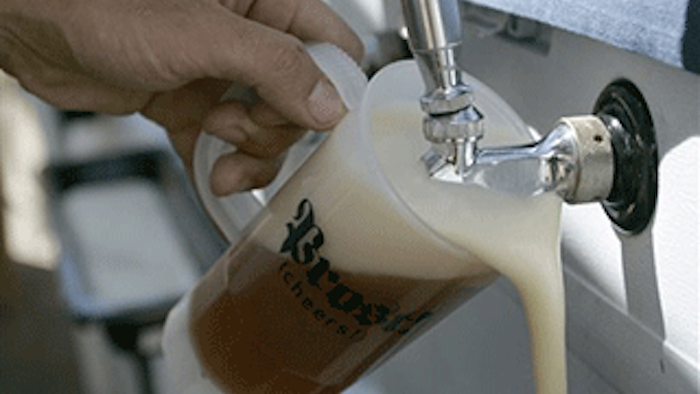 The Utah liquor commission put Snowbird Ski Resort officials on notice this week that it might not grant the permit for its Oktoberfest festival, held each weekend from Aug. 16 to Oct. 12. The commission is trying to rein in alcohol permits for special events as it reevaluates who should really be approved.

"We're trying to send a signal that we are tightening up," state liquor commission chairman David Gladwell said during a monthly meeting Tuesday, the Salt Lake Tribune reported.

The seven-person board approved a permit for the Snowbird's Father's Day Brewfest in mid-June, but only following a lengthy discussion Tuesday. Gladwell said the commission is studying state law to determine if the single-event permits were designed for charitable organizations, and not businesses that use them to rake in profits.

"Maybe we were allowing something that the Legislature had not intended?" said Gladwell, the Deseret News reported.

Snowbird general manager Bob Bonar said he was surprised to learn two weeks ago that the commission was considering rejecting the permit for the Father's Day Brewfest. He said he'll work with the commission to ensure that it approves a permit for Oktoberfest, which has been held annually since 1973 and draws about 60,000 people.

"Not having a liquor permit for Oktoberfest would hurt a lot," Bonar said. "It's the second best thing we do after powder skiing."

Utah's liquor laws are regularly debated during the legislative session with many tourism, restaurant and bar owners pushing to "normalize" the laws to make the state friendly to out-of-state visitors.

They've successfully lobbied to change some rules, such as in 2009, when the state did away with a requirement for bars to operate as members-only social clubs, but hit a brick wall in the recent legislative session.

In January, just days before this year's legislative session, the Mormon church issued a defense of Utah's liquor laws, calling on lawmakers to leave them alone and saying they keep residents safe.

Most Utah legislators are Mormon, and an estimated two-thirds of residents belong to the faith.

Avoiding alcohol use is a fundamental part of being considered a fully practicing member of the Mormon church, and those who drink face social stigma and are barred from worship in temples.

Utah Department of Alcoholic Beverage Control executive director Sal Petilos told the Tribune that the board should only issue permits for special festivals and galas that are one-time events and last only a few days and are used by a civic or community group to promote a common good, The Tribune reports.

The second requirement is causing the hesitation in approving permits for Snowbird and other businesses. So far, two businesses have been denied.

Gladwell said the commission has not reached a consensus, the Deseret News reports.

Bonar argued before the commission that state law doesn't explicitly prohibit for-profits from getting the permits, meaning they shouldn't be automatically denied.