An increasing number of clinical studies confirming the health benefits of nutraceuticals and their broad applications in food, beverages, dietary supplements, and pediatric and adult nutritional preparations has provided support for the growing use of nutraceutical ingredients.

Amino acids and soy-based ingredients segments of body building market witnessed healthy growth rate during the review period (from 2007 to 2011). The growth in amino acid & soy-based ingredient segment is largely attributed to increased trend of fitness in most of the developing nations. The protein and peptide segment is also expected to have steady growth rate because of growing demand for nutritional diet and proper physic all over the world.

Nutraceutical ingredients presents opportunity for new entrants as well for existing players, due to the fact that most of the raw materials are abundant and product manufacturers are increasingly focusing on contract manufacturing outsourcing (CMO). Moreover, large product manufacturers are looking for backward integration, which will grow the competition into the market and will intern increase the market size of the nutraceutical ingredients. 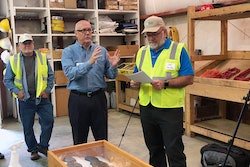 Why Patagonia's Founder Gave His Company Away to Fight Climate Change

Reliability is essential and this demands high integrity from the pressure relief technology.
September 21, 2022

Learning this key formula could be the next step in creating less downtime.
September 20, 2022

The HELSI laser will support demonstration efforts with the Army’s IFPC-HEL, which is scheduled for laboratory and field testing this year.
September 19, 2022

The company's history in welding product innovation started with a storefront in Chicago.
September 16, 2022

Univ. of Michigan’s ZEUS Will Be Most Powerful Laser in U.S.

Javelin is a versatile, one-man-portable and multi-purpose weapon system.
September 15, 2022