Just whose idea was the "Dumb Starbucks" coffee shop that popped up and started serving free drinks from the corner of a Los Angeles strip mall? After several days of speculation, the big reveal came Monday: The buzz-generating shop was a comedian's publicity stunt. 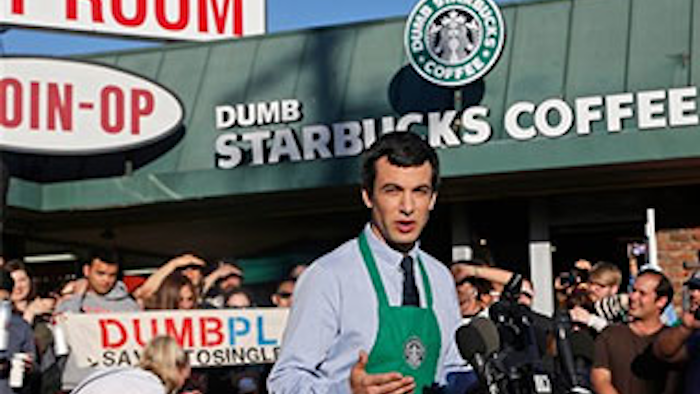 LOS ANGELES (AP) — It was a caffeine-charged Hollywood whodunit: Just whose bright idea was the "Dumb Starbucks" coffee shop that popped up and started serving free drinks from the corner of an otherwise uncelebrated strip mall?

After several days of speculation, the big reveal came Monday: The buzz-generating shop was a comedian's publicity stunt.

Keeping a straight face, Canadian comic Nathan Fielder told a crowd he was pursuing the "American dream" — before acknowledging that he planned to use the bit on his Comedy Central show "Nathan for You."

Soon after, Los Angeles County health inspectors shut it down for operating without a valid permit.

Earlier in the day, and for much of the weekend, a line from the store wound alongside the parking lot and up the block. Some patrons snapped pictures in front of a green awning and mermaid logo that is familiar — except that the word "Dumb" is prominently featured.

They weren't coming for gourmet fare: Their descriptions of the coffee ranged from "horrible" to "bitter," and one parent said his daughter complained that the hot chocolate was like water.

Instead, they were just coming to say they came, and to score a white paper cup with a sticker bearing the curious logo.

"It was a pretty dumb idea to come out in the cold" and wait for nearly two hours to get a coffee, joked Anthony Solis, who lives in nearby Hollywood.

Dumb Starbucks opened Friday, and the interest it generated grew over the weekend with a boost from posts on Twitter and Facebook.

Before the rush of the past few days, production crews came to the location several times to film, according to permits taken out with Film LA, a private nonprofit that issues the licenses. The permits were billed to Abso Lutely Productions, which has produced Fielder's show.

Once opened, Dumb Starbucks caught the attention of the real Starbucks.

"While we appreciate the humor, they cannot use our name, which is a protected trademark," Laurel Harper, a spokeswoman for Seattle-based Starbucks Corp., said in an email.

She added that most trademark disputes are handled informally, suggesting the company might not need to take legal action.

At the front counter, a sheet of frequently asked questions said the store was shielded by "parody law."

"By adding the word 'dumb,' we are technically 'making fun' of Starbucks, which allows us to use their trademarks under a law known as 'fair use,'" the sheet said.

It continued: "In the eyes of the law, our 'coffee shop' is actually an art gallery and the 'coffee' you're buying is considered art. But that's for our lawyers to worry about."

"Fair use" can protect parodies of copyright material, but a trademark such as the logo has different protections that Dumb Starbucks may well be violating, said Mark McKenna, a trademark law expert at the University of Notre Dame.

Fielder, the comedian, said Monday that he didn't need Starbucks' permission and he was glad the company had not pursued a "case they know they can't win."

He then revealed that city health inspectors had arrived and told his staff that they had to stop serving drinks.