The members of the Passamaquoddy tribe have looked under their feet for a bottled water plant and have turned to the sky for a wind farm. But it's the forest that will be the first to deliver, as the impoverished tribe seeks to become one of the biggest maple syrup operations in Maine. 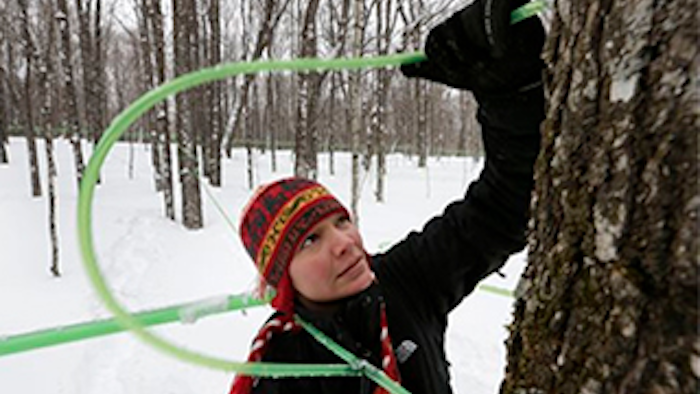 PRENTISS TOWNSHIP, Maine (AP) — The members of the Passamaquoddy tribe have looked under their feet for a bottled water plant and have turned to the sky for a wind farm. But it's the forest that will be the first to deliver, as the impoverished tribe seeks to become one of the biggest maple syrup operations in Maine.

The tribe, which owns 60,000 acres of land near the Canadian border in western Maine, has big plans for the syrup operation deep in the woods. Operating this season with nearly 3,000 taps, the tribe plans to expand over the next three years to 60,000.

The goal isn't to create a maple syrup empire, but rather to bring hope and stability to a tribe with soaring joblessness and poverty, said Indian Township Chief Joseph Socobasin.

"It creates an opportunity that we've never had," Socobasin said of the operation, one of several economic development projects underway for a tribe with unemployment topping 60 percent.

The project falls in line with a tribal movement nationwide to get beyond casinos and federal dollars to create self-sustaining operations that can create spinoff jobs, said Carl Artman, a Milwaukee-based lawyer who advises tribes on economic development. Across the country, tribes are getting into oil and gas operations and real estate development. In Florida, for instance, the Seminoles own the popular Hard Rock brand.

For the Passamaquoddies, the syrup project is appealing because of tribal roots. Native Americans were making maple syrup long before the first European settlers arrived. It's also attractive because it's a renewable resource and allows tribal members to spend time with nature.

The land is true wilderness, covered in 3 feet of snowpack even in April and teeming with moose, deer and lynx. There's even a bear den among the tapped trees.

"It goes back to our ancestors. Our ancestors did this," said Marie Harnois, who's in charge of the operation. "It will create employment year after year and hopefully make a profit for our tribe."

On a recent day, 5 miles of bright green tubes running from tree to tree stood out against a white backdrop of snowy forest. The tubes collect sap from several thousand maple trees, transporting clear liquid that will eventually be transformed into sweet amber syrup.

It's a modern operation with a generator and pump to keep sap flowing and reverse-osmosis equipment to create concentrated sap, which is certified as organic, Harnois said.

This season, the sap is being boiled down to syrup by a third party. Next year, the tribe will have its own equipment to make and bottle the syrup, she said. The tribe is working on a name for the syrup, which will be distributed globally. Wholesale rates were roughly $35 to $40 a gallon in recent years.

Eventually, the operation will support a dozen jobs. Coupled with its other projects, the tribe hopes the jobs will add up and the operations will contribute revenue to tribal operations.

Larry Libby, one of the crew members, said work is hard to come by back home in Indian Township, and he's happy to have a job.

"I can see this job going a lot further than where we are now," said Libby, 24. "So there's a lot of room for building."

The tribe is also in the final stage of negotiations with investors to build a bottled water plant 200 miles from the syrup operation, and it's reviving plans for a wind power project. The tribe also has a blueberry operation, and it hasn't given up the dream of operating a casino, either.

For the Passamaquoddies, it's all about creating jobs to keep tribal members from having to leave Indian Township and Pleasant Point, the ancestral homeland in eastern Maine where more than 2,000 tribal members live.

For the maple syrup project, the tribe tapped a $1.5 million federal grant to get the operation started. The first of three installments came through in December.

"With all of those pieces coming together, I think we could have a significant impact on the number of people who are unemployed," Socobasin said. "It gives our members some options."