The all-American pair introduced a new taste of history to beer and bourbon fans alike through a cross-merchandising program starting in the spring and a new collaborative brew launching in the fall. 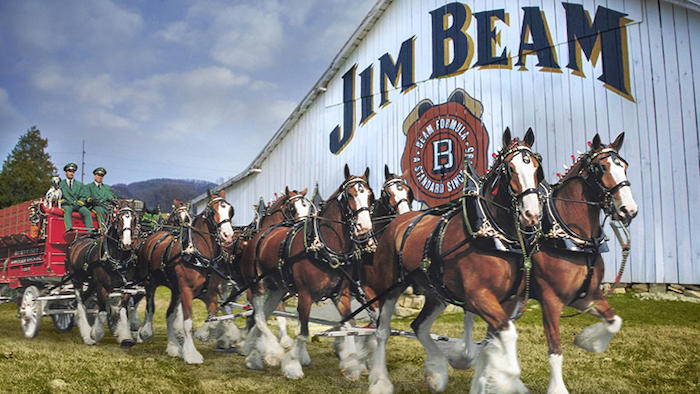 NEW YORK, April 5, 2018 (PRNewswire) — This week, Budweiser and Jim Beam bourbon toasted to the future as they join their 365 collective years of stateside distilling and brewing history to kick off a new friendship and marketing collaboration. The all-American pair introduced a new taste of history to beer and bourbon fans alike through a cross-merchandising program starting in the spring and a new collaborative brew launching in the fall.

Starting this month, the two brands will begin appearing together at bars and retail venues across the country, just in time for baseball season. Inspired by the "beer and a bourbon shot" occasion, the new on-premise cross-merchandising program will feature Budweiser and Jim Beam bourbon together for the perfect pairing.

Following, in September, Budweiser's brewmasters and Jim Beam's seventh generation Master Distiller Fred Noe will celebrate the upcoming 85th anniversary of the Repeal of Prohibition with the unveiling of a new limited-edition collaborative brew – Budweiser Reserve Copper Lager. The Copper Lager is brewed with two-row barley and aged on Jim Beam bourbon barrel staves to create a toasted oak aroma and deliciously nutty taste with caramel rye and vanilla notes.

"We are very excited about this partnership not only because both brands share common history but also an obsession for quality and a decade's long connection to America," said Ricardo Marques, Vice President of marketing for Budweiser. "This is a truly unique partnership and innovation that will surely drive excitement with our drinkers."

"This partnership feels especially natural given our brands' common values and the pivotal roles they've both played in American history," said Rob Mason, Vice President of marketing for Jim Beam. "Our family distillers have produced 'America's Native Spirit' since 1795, using traditions and techniques passed down through the generations. This is another exciting milestone in Jim Beam's history."

The World's most valuable beer brand and the World's No. 1 bourbon brand share impressive histories of persevering through the Prohibition era while they were not able to produce their signature products. For Jim Beam, it was their fourth generation distiller – James B. Beam – who rebuilt his family's distillery in a mere 120 days to produce what is today the world's best-selling bourbon. Similarly, Budweiser kept its doors open through Prohibition by creating other non-alcoholic packaged goods as they waited to bring beer back to America. Budweiser's Reserve Copper Lager aged on Jim Beam bourbon barrel staves celebrates this important moment for these brands and all Americans.

The marketing partnership between Budweiser and Jim Beam promises to deliver unique product innovations, integrated marketing efforts and a unique way to delight both beer and bourbon fans. The two brands will lean on their incredible American heritage to deliver a modern drinking experience this year and beyond.