If You Savor Scallops, Good News: Price Drop May Be In Store

Good news for scallop fans. Already one of the most readily available higher-priced seafoods to consumers, the succulent shellfish could fall in price this year. 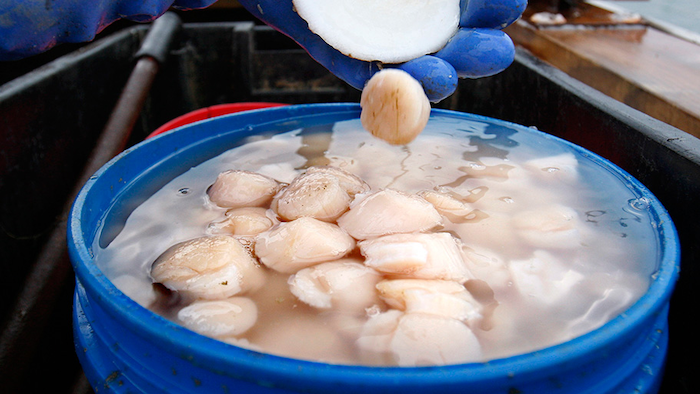 PORTLAND, Maine (AP) — Good news for scallop fans. Already one of the most readily available higher-priced seafoods to consumers, the succulent shellfish could fall in price this year.

American harvests of scallops have grown in recent years, from 33.8 million pounds in 2014 to 40.5 million pounds in 2016, and are poised to go up again in 2018 due to a potential increase in the amount fishermen are allowed to bring to shore. Meanwhile, the U.S. has been importing even more scallops from countries such as China, Japan and Canada to meet consumer demand.

Some members of the seafood industry say it could be a recipe for the price of the shellfish to fall for consumers, who sometimes pay more than $20 per pound at supermarkets. Fishermen have received slightly less money for scallops at the docks in recent years — about $12 per pound in 2016, down about 50 cents from two years previously.

Consumers could start to see that price drop in restaurants and grocery stores this year, said Peter Handy, president and chief executive officer of Portland, Maine-based Bristol Seafood, a processor and distributor.

"There is a lot of anxiety about it. Prices could go down. I can't think of a scenario in which prices could go up," he said. "The question is, are we standing at the edge of a cliff or are we looking at a little bit of weakness relative to last year?"

2018 has a chance to be only the third time since 1950 in which U.S. scallop harvesters — who dredge for scallops off places like Maine and Nantucket island in Massachusetts — collect more than 60 million pounds of the shellfish, Handy said. That most recently happened in 2006. The price of scallops in the U.S. will likely be affected by this year's imports and exports, which are hard to predict, he said.

The state scallop fisheries, led by Massachusetts, New Jersey and Virginia, have been fairly strong in recent years. Maine fishermen, who saw their state's scallop fishery collapse in the mid-2000s, had their largest haul in 20 years in 2017.

Conservation efforts have helped protect the scallops as a resource, so fishermen have been having productive years, said Patrick Keliher, commissioner of the Maine Department of Marine Resources.

"Those things are paying off, and we're seeing that in overall value," he said.

But fishermen remain anxious about what this year will bring for the price of scallops, said Alex Todd, a Maine harvester.

"Even this year, price started out the same as last year, but it has dropped fairly significantly in recent weeks," he said.