Minnesota announced restrictions Tuesday on how farmers can use the herbicide dicamba in 2018, responding to complaints by soybean growers across the country that it harmed their crops this year. 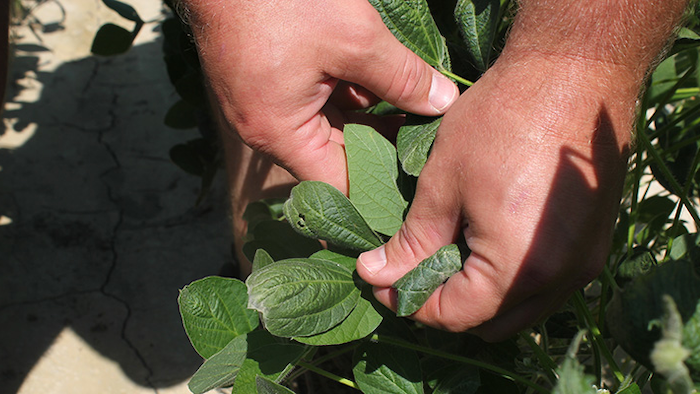 FILE - In this July 11, 2017, file photo, East Arkansas farmer Reed Storey shows the damage to one of his soybean plants in Marvell, Ark. Storey said half of his soybean crop has shown damage from dicamba, an herbicide that has drifted onto unprotected fields and spawned hundreds of complaints from farmers. Minnesota has announced restrictions on the use of the herbicide dicamba for 2018 in response to complaints by soybean growers across the country that it harmed their crops this year. The Minnesota Department of Agriculture on Tuesday, Dec. 12, 2017, set a June 20 cut-off date for applying the herbicide. (AP Photo/Andrew DeMillo, File File)

MINNEAPOLIS (AP) — Minnesota announced restrictions Tuesday on how farmers can use the herbicide dicamba in 2018, responding to complaints by soybean growers across the country that it harmed their crops this year.

The Minnesota Department of Agriculture set a June 20 cutoff date for applying the herbicide and prohibited applications when the temperature or forecast high for the day is above 85 degrees. The rules are meant to reduce instances of the herbicide drifting and damaging neighboring fields, which has been a problem in soybean- and cotton-growing states nationwide this year.

"We will be closely monitoring the herbicide's performance with these restrictions in 2018," Agriculture Commissioner Dave Frederickson said in a statement.

Farmers have used dicamba for decades, and its problems with volatility and drift were well-known. But its use has surged in the last couple years since agribusiness companies Monsanto, BASF and DuPont introduced genetically engineered, dicamba-tolerant varieties of soybeans and cotton so that farmers could use the herbicide to control tough weeds in those crops, such as pigweed, that have become resistant to other weed killers such as glyphosate, also known as Roundup.

The Minnesota Department of Agriculture says it received 253 complaints from soybean growers in 49 Minnesota counties, including 55 requests for formal inspections. University of Minnesota researchers estimate that 265,000 acres across the state were affected.

"We need dicamba," the group's president, Michael Petefish, said in a statement. "We also need these new restrictions. Producers need to have the ability to adapt this product to their operations, and these additional guidelines will allow users to do just that in a safe and environmentally sound manner."

"There's no scientific reason to have a cutoff date or a temperature limit. There is no testing that supports it," Scott Partridge, Monsanto's vice president of global strategy, said in an interview. He encouraged the state to be flexible about the cutoff date if local conditions warrant. He pointed out that pigweed doesn't know the cutoff date, and it will be frustrating for farmers who find infestations of resistant weeds after that date not to have the herbicide available.

Partridge said the solution lies in education and training, so that farmers and applicators use the right equipment and follow the label instructions. He pointed out that in Georgia, where training was mandatory this year, the state received no reports of off-target movements of dicamba. In Monsanto's experience, he said, when dicamba is applied according to the label, the herbicide doesn't move beyond the buffer zone and damage nearby crops.

The U.S. Environmental Protection Agency announced a deal with Monsanto, BASF and DuPont in September for new voluntary labeling requirements. Additional training and certifications will be required for workers who apply dicamba to crops. The new federal rules also limit when and how the herbicide can be sprayed, such as time of day, with winds not exceeding 10 mph.

Other states have also adopted restrictions that go further than the federal rules. Neighboring North Dakota has banned applications on soybeans after June 30 or the crop's first bloom phase, whichever comes first. Monsanto has sued to block even tougher restrictions proposed in Arkansas to prohibit its use from April 16 through Oct. 31. A legislative panel on Tuesday recommended state regulators revise the proposed ban.

Arkansas has received nearly 1,000 complaints about dicamba. The state imposed a temporary ban on its sales and use earlier this year.