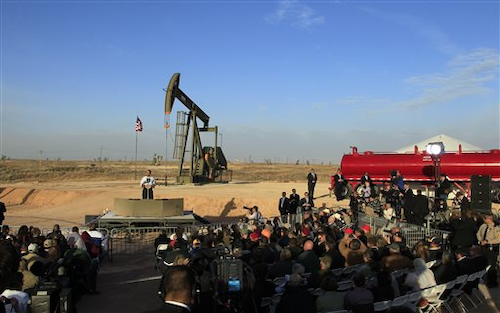 North Dakota sweet crude was fetching about $38 a barrel Wednesday, which is about half of what it sold for a year ago. The number of drilling rigs has plummeted in North Dakota by nearly two-thirds to 66 due to low prices but production remains at near-record levels as drillers concentrate rigs in high-volume areas.

Cutting, whose group represents more than 550 companies working in the oil patch, said the industry has increased efficiencies to keep production steady at about 1.1 million barrels daily, second only to Texas. But the industry will have a tougher time adapting to what she calls a "jurisdictional grab" by the federal government.

North Dakota's oil industry is most concerned about the possibility of the federal government regulating the burning of natural gas as a byproduct of oil production, Cutting said.

The percentage of flared natural gas in North Dakota is about 20 percent because the infrastructure isn't in place to move it all to market. Less than 1 percent of natural gas is flared from oil fields nationwide, and less than 3 percent worldwide, the U.S. Energy Department said.

"There is so much going with this stuff nobody can possibly store it in their mind," Wardner said.

North Dakota lawmakers this year passed legislation that established a committee of state officials and industry representatives to review federal rules that could detrimentally impact the state's energy and agriculture sectors. The state also has $1.5 million in taxpayer dollars set aside to support potential state lawsuits.

Wayde Schafer, a North Dakota spokesman for the Sierra Club, said the state has been far too sympathetic to the oil industry.

"The state has been carrying the water for the oil industry," he said. "Rules are in place for protection. Just because somebody doesn't like them doesn't mean they are not necessary."

Cutting told reporters that the spate of federal legislation is aimed at "zero fossil fuels." She said the legislation is "on the fast-track — they want it done before the end of this administration."

"Every regulation has a cost," Cutting said.