The Massachusetts Institute of Technology announced a five-year plan Wednesday to combat climate change but said it won't divest its $12.4 billion endowment from fossil fuels, despite pressure from students and a campus committee. 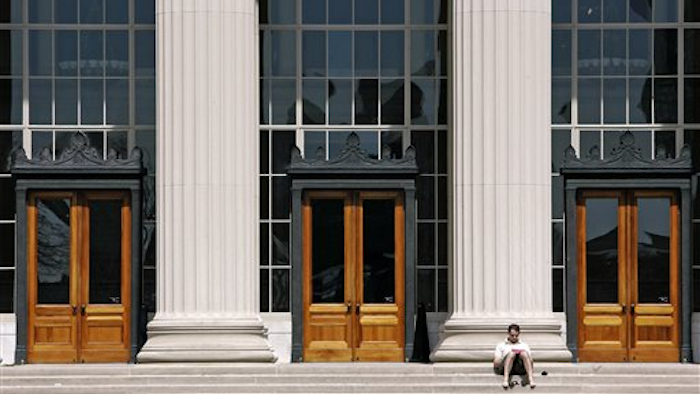 BOSTON (AP) — The Massachusetts Institute of Technology announced a five-year plan Wednesday to combat climate change but said it won't divest its $12.4 billion endowment from fossil fuels, despite pressure from students and a campus committee.

Senior officials at the elite science and engineering research school crafted the "action plan" after a yearlong effort to gauge campus opinions on climate change. The university hosted a debate on the topic and assembled a committee that ultimately urged MIT to divest from the most damaging fossil fuel industries, including coal and tar sand companies.

The MIT report warns of "catastrophic outcomes" linked to current energy use, but said the school can help by maintaining ties with fossil fuel companies.

"We choose not to divest from fossil fuel companies because we think engagement stands the greatest chance of success," MIT President L. Rafael Reif said in a conference call with reporters. "MIT seeks to convene key players with the goal of helping drive significant progress for the world. There is a great deal to do and we are eager to get started."

At MIT and campuses across the United States, students have pushed universities to pull their investments in fossil fuels. They argue that coal and oil companies are driving climate change, with the support of heavy college investments. Leaders at MIT took up the issue after student group Fossil Free MIT called for divestment last year.

"At the end of the day, we got completely ignored without any forewarning," said Geoffrey Supran, a leader of Fossil Free MIT who represented graduate students on the school's climate change committee. "Our sense is that essentially MIT has put money before morals and its students' futures."

Supran said the decision is a rebuff to the 3,500 MIT community members who signed a petition supporting divestment.

While deciding against divestment, MIT announced a sweeping effort to research climate change and develop technology combating it. Its plan calls for eight new "low-carbon energy centers" that will work with companies to develop technologies focusing on solar energy, nuclear fusion, energy storage and other initiatives. Each center will seek about $8 million in annual funding over five years, totaling more than $300 million.

In the past, research has been done through individual projects between companies and researchers, said Maria Zuber, vice president for research.

"But both we are realizing and the companies are realizing that these kinds of questions are sufficiently complex that just simple individual research projects are not going to be able to address them," Zuber said.

MIT also is trying to cut down its use of fossil fuels on campus, with plans to pursue more efficient energy technology in its buildings. Among other goals, the college would reduce campus emissions by at least 32 percent by 2030 and would eliminate the use of fuel oil by 2019.

"Climate change is a problem so big it can be difficult to face," Reif said. "But we know the scientific evidence is overwhelming and we must face it and take action together."

Research has been mixed on whether divesting from fossil fuels would hurt a university's endowment. The MIT panel that studied climate change reported that the impact wouldn't likely be great.

Zuber said university leaders didn't seek the endowment president's opinion on that question while crafting the plan. "We never asked him what his opinion was, and he never offered an opinion," she said.

The MIT committee of faculty and students called for divestment from some industries, in part to take a strong stance on climate change, but said full divestment would have a negligible effect on energy companies and would remove the possibility of working together on improvement.

"Engagement is the only way to get there," he said. "I'm most concerned that we might be held back not by the difficulty of the work, but by division."