As of August, Canada provided 45 percent of all crude oil imports to the United States, almost three times as much as all Persian Gulf countries combined. 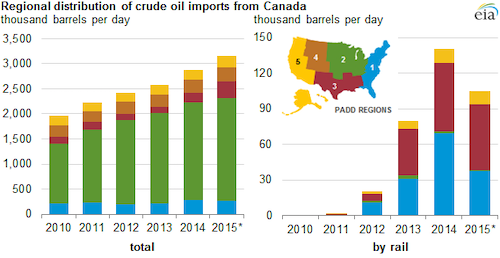 The United States has been the primary destination for Canada's crude oil exports since the early 2000s. Based on data through the first half of this year from Canada's National Energy Board, 99 percent of Canada's crude oil exports were sent to the United States. More than half of these volumes went to petroleum refineries in the Midwest (Petroleum Administration for Defense District, PADD 2).

Import data from the U.S. Department of Commerce specify the nearest port of entry but not the mode of transit used to import this crude oil. Based on entry port data and pipeline locations, it is reasonable to expect that most of these imports came through pipeline systems such as Enbridge Mainline, Kinder Morgan Trans Mountain, Spectra Express, and TransCanada Keystone. A smaller portion, about 3%, was transported by rail.

Within the United States, the regional destination of crude oil sent by rail is different from other modes of shipping crude oil. While about 65% of Canadian crude oil imports by pipeline and other modes not including rail are shipped to refineries in the U.S. Midwest (PADD 2), imports from Canada by rail go primarily to Gulf Coast (PADD 3) and East Coast (PADD 1) refineries.

The United States first imported crude oil by rail from Canada in October 2010, with the first full year of shipments by rail totaling 2,000 barrels per day (b/d) in 2011. Rail shipments continued to increase through 2014, when they reached 140,000 b/d, but they have decreased in 2015. Because transporting crude oil by rail is generally more expensive than transporting it by pipeline, rail is used only when appropriate cost differentials exist or where pipeline infrastructure is insufficient.