Chicago 'Petcoke' Piles Must Be Removed

Chicago's mayor and the Illinois attorney general announced an agreement with an Indiana company that will require it to remove huge piles of petroleum coke from the city's southeast side and accept no other shipments for the time being. 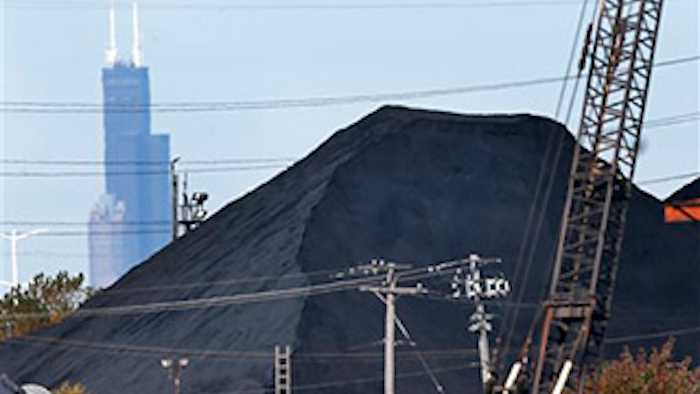 CHICAGO (AP) — Chicago's mayor and the Illinois attorney general announced an agreement with an Indiana company Thursday that will require it to remove huge piles of petroleum coke from the city's southeast side and accept no other shipments for the time being.

Known as "petcoke," the material is a black powdery byproduct of oil refining that's been accumulating along Midwest shipping channels, sparking health and environmental concerns.

The deal is part of a pending lawsuit over air quality and lack of proper permitting against Hammond, Ind.-based Beemsterboer Slag Corp., which operates a facility along the Calumet River.

Mayor Rahm Emanuel and Attorney General Lisa Madigan announced the details near where residents have complained about the problem. They also touted possible long-term regulations, including proposed city regulations and statewide legislation.

The agreed interim order says Beemsterboer has to remove petcoke and prevents it from accepting, handling or storing any additional materials. It also requires the company to document where it's sent. The lawsuit, filed by Madigan's office and the city of Chicago, alleges the company doesn't have permits to handle the substance, among other things. The company didn't admit fault in Thursday's agreement.

"The goal here is ... number one, stop the air pollution, stop the violation," Madigan said. "The ongoing air pollution violations are not ones that are either legal or safe for people to live near."

Officials with Beemsterboer didn't return messages Thursday. But the company has already been removing carbon-based products from its Chicago facilities and has said it is cooperating fully with Illinois officials.

City officials hope to put more long-term regulations in place as the Beemsterboer lawsuit and another one against KCBX Terminals Co., which also handles the substance, are pending.

Petcoke has been part of the industrial landscape for decades as refineries installed equipment to "cook" residue left over from making gasoline and diesel into a solid fuel that could be burned in power plants and cement kilns.

Residents complained they could not open windows in the summer because of all the black dust.

The substance isn't classified as hazardous, but it contains heavy metals and inhaling the fine particles can cause respiratory problems.

Proposed city regulations — up for a public hearing in January — call for large bulk material storage facilities to fully enclose materials such as coal, pig iron and petcoke, giving companies two years to do so. Smaller storage facilities would be required to install wind barriers to stop material from polluting nearby neighborhoods.

"We're catching up to what we should have done," Emanuel said. "The whole goal here is to get the city of Chicago up to speed with what was going on with the industry."

Separately, two city ordinances have been proposed, including a ban.

Still, community activists who've been worried about the impact, say the proposed regulations could go further, including requiring the companies to build the containment storages faster or outlawing petcoke from residential areas.

"Enclosures is not the total answer. We don't think this stuff belongs in a community's backyard. And when I say backyard, I literally mean backyard," said Peggy Salazar of the Southeast Environmental Task Force. "We're hoping this is the first steps."

"We will also be working on the statewide level so that this is not a situation that moves from the city of Chicago simply to other communities around our state," Madigan said.

KCBX, which stores petcoke from the nearby BP refinery in Whiting, Ind., said in a statement that it is "committed to doing the right thing and managing our operations in a manner that protects the health and safety of our neighbors." The company said it has invested $30 million in upgrading a bulk materials terminal it purchased last year. That includes a $10 million dust suppression system, it said.

That company said it is also working with the U.S. Environmental Protection Agency to install air monitors to confirm whether the new system is working.