Turkey doesn't recognize ethnically divided Cyprus as a sovereign state and strongly opposes its gas search, arguing that it ignores the rights of breakaway Turkish Cypriots to any mineral-generated wealth. Cyprus was split in 1974 when Turkey invaded after a coup. 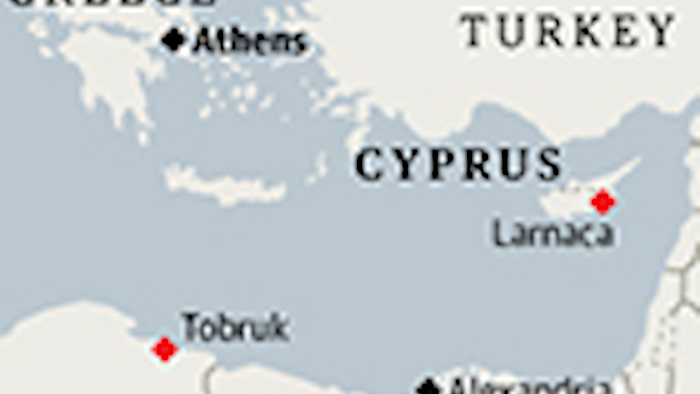 (AP) — Cyprus' right to explore for oil and gas off its shores must be respected by all countries, including Turkey, Israel's foreign minister said Thursday. "We think it's crucial to respect all international norms and obligations and to act according to acceptable rules in the international community," Avigdor Lieberman said after talks with his Cypriot counterpart Ioannis Kasoulides. Lieberman said it's "extremely unnecessary" to stir any more tension in a conflict-ridden region.

Turkey doesn't recognize ethnically divided Cyprus as a sovereign state and strongly opposes its gas search, arguing that it ignores the rights of breakaway Turkish Cypriots to any mineral-generated wealth. Cyprus was split in 1974 when Turkey invaded after a coup by supporters of uniting the island with Greece. A Turkish Cypriot declaration of independence in 1983 is recognized only by Turkey which maintains some 35,000 troops in the island's breakaway north. Cyprus' Greek Cypriot President Nicos Anastasiades last month suspended United Nations-sponsored reunification talks after Turkey carried out a mineral search in waters where the Cypriot government had already granted drilling rights.

Espen Barth Eide, the newly appointed U.N. envoy for Cyprus, is conducting shuttle diplomacy in the region to get reunification talks back on track. U.S. Ambassador to Cyprus John Koenig said Tuesday that Washington is "seriously engaged with all parties" in support of those U.N. efforts. Lieberman said Israel, whose relations with Turkey are strained, is looking to achieve "tangible results next year" in its cooperation with Cyprus to exploit gas reserves that have been found in exclusive economic zones of both countries.