Crews from BP worked Tuesday to clean up an undetermined amount of crude oil that spilled into Lake Michigan and affected a section of shoreline near Chicago following a malfunction at BP's northwestern Indiana refinery, officials said. 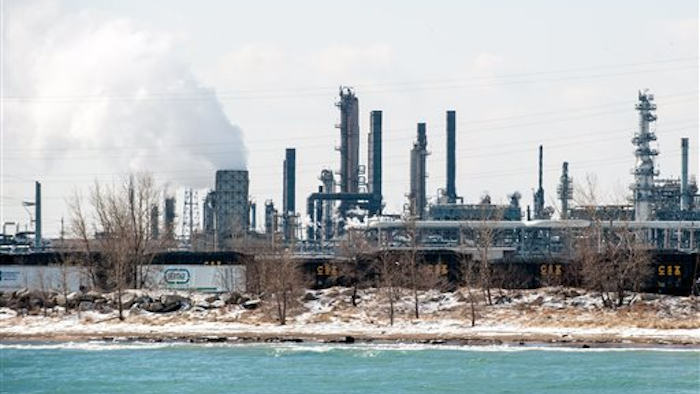 WHITING, Ind. (AP) — Crews from BP worked Tuesday to clean up an undetermined amount of crude oil that spilled into Lake Michigan and affected about a half-mile section of shoreline near Chicago following a malfunction at BP's northwestern Indiana refinery, officials said.

The spill reported Monday afternoon by BP appears to have been contained by company crew members who deployed absorbent booms around the spill site, said Mike Beslow, on-scene coordinator for the U.S. Environmental Protection Agency's Region 5.

BP spokesman Scott Dean said the area affected by the spill was a cove along the Lake Michigan at the company's sprawling Whiting refinery, which covers about 1,400 acres.

The spill is about 20 miles southeast of downtown Chicago but was not expected to pose any threat to municipal water supplies that draw on the lake's water, Beslow said.

A Coast Guard flyover of the area Tuesday did not reveal any oil outside the containment booms, Beslow said during a Tuesday afternoon media briefing, "but there is oil on the beach that is being addressed."

Beslow said BP crews were using vacuum trucks to suck up the corralled oil and were cleaning up oil along 2,700 feet of private shoreline the company owns at the Whiting site, he said.

The EPA and the U.S. Coast Guard were supervising that work, Beslow said.

Beslow said the Coast Guard was working with BP officials to determine how much oil had been discharged into the lake.

Dean, the BP spokesman, said northerly winds were helping contain the oil by pushing it toward the shoreline.

"It's in the lake, yes, but it's not moving around freely. It's been kind of contained because of the weather and of the geography of the lakefront there," Dean said.

BP said in a statement Tuesday evening that it believes that "an upset at a crude distillation unit may have sent crude oil into the refinery's cooling water outfall and then into the lake."

The company said it has taken steps to prevent another discharge and might have an estimate Wednesday on how much oil was spilled.

BP initially reported to the EPA that when its workers discovered the spill they observed an oily sheen that covered about 5,000 square yards, said Susan Hedman, the EPA's regional administrator.

Dan Goldblatt, a spokesman for the Indiana Department of Environmental Management, said an agency official who was at the scene around 2 a.m. Tuesday had reported "a large sheen on the lake."

Hedman said the EPA is not aware of any previous oil spills at the site, but the agency is just beginning its assessment of this week's spill.

"EPA's lawyers will be looking into this matter and determining whether or not enforcement action is appropriate," she said.

U.S. Sen. Carl Levin, D-Mich., who co-chairs the Senate Great Lakes Task Force, said in a statement that the incident "underscores the importance of vigilance in protecting our Great Lakes from oil spills."

"We are fortunate that the spill appears to have been quickly contained, but I will continue to monitor developments to ensure that the cleanup is rapid and complete," Levin said.