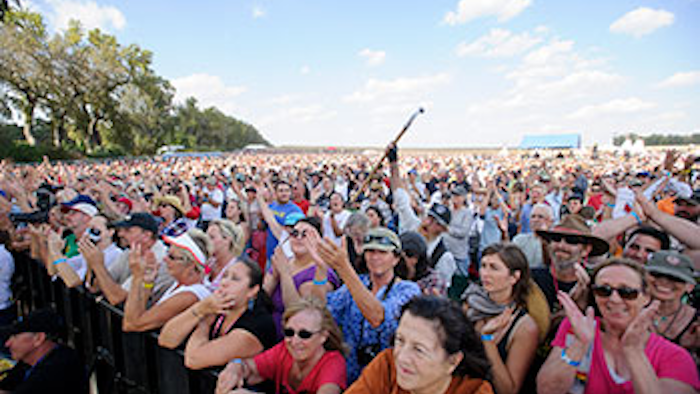 The Lincoln Journal Star reports politicians and activists spoke to the crowd on Art and Helen Tanderup's farm about the pipeline project between performances.

Young said before the concert that he thinks it's important for America to use more renewable energy, and he supports people who are trying to offer solutions.

"Stand up and be creative and have ingenuity and come up with solutions so we're not just complaining about problems, we're solving them," Young said. "That is what America needs to do."

The proposed TransCanada Keystone XL pipeline needs presidential approval to proceed because it crosses the U.S.-Canada border. But that decision remains on hold while Nebraska's Supreme Court considers whether the 2012 law used to approve the Keystone XL's path across the state is valid.

Pipeline critics worry it could contribute to pollution and contaminate groundwater if there is a leak.

TransCanada says the pipeline, which it first proposed in 2008, would have advanced safety features to prevent and detect leaks. Supporters say the project would create construction jobs and bolster a friendly source of oil.

Further delays in the pipeline project will add to the volume of crude oil on railroads across the United States and Canada, said TransCanada spokesman Mark Cooper.

"Delaying the Keystone XL means encouraging the loss of good jobs for Nebraskans and more than $20 million a year in annual property taxes to counties for schools, roads and other infrastructure once the Keystone XL is at full capacity," Cooper said.

The Keystone XL pipeline is designed to carry oil from Canada across Montana, South Dakota, Nebraska, Kansas, Oklahoma and Texas. TransCanada also has proposed connecting it to the Bakken oil field in Montana and North Dakota.

The southern leg of the pipeline between Oklahoma and Texas is already operational.

Organizers of the concert from Bold Nebraska and the Cowboy and Indian Alliance promise to keep up the pressure in the hope of persuading President Barack Obama to reject it.

"We are not just going to protest and leave," said Oglala Lakota President Bryan Brewer. "We're going to stop it."

After Young and Nelson performed for about an hour each, members of the audience marched into one of the Tanderups' fields to form a human chain across the pipeline's proposed path.

Sales of the $50 tickets for the concert generated about $385,000, but it cost roughly $100,000 to hold. Organizers didn't have available Saturday an exact total of the proceeds — which will be split between Bold Nebraska, the Indigenous Environmental Network and the Cowboy and Indian Alliance.