Police said Friday a man recently let go from a food processing plant in an Oklahoma City suburb beheaded a woman with a knife and was attacking another worker when he was shot and wounded by the owner of the company. The 30-year-old man, who has... 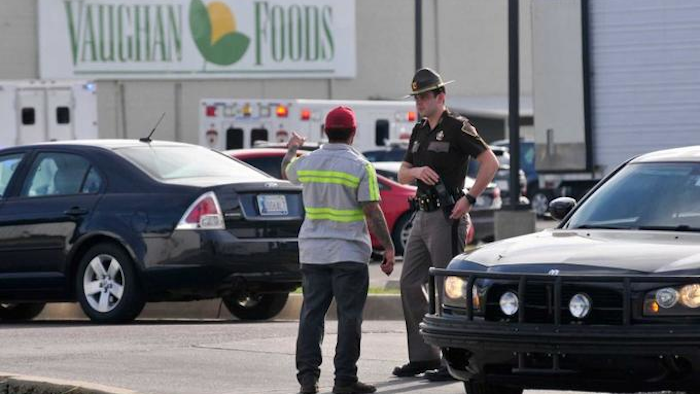 Police said Friday a man recently let go from a food processing plant in an Oklahoma City suburb beheaded a woman with a knife and was attacking another worker when he was shot and wounded by the owner of the company.

The 30-year-old man, who has not been charged, stabbed Colleen Hufford, 54, severing her head in Thursday's attack at Vaughan Foods, Moore Police Sgt. Jeremy Lewis said.

Lewis said the man then stabbed Traci Johnson, 43, a number of times before being shot by Mark Vaughan, a reserve sheriff's deputy and the company's chief operating officer.

"This was not going to stop if he didn't stop it. It could have gotten a lot worse," Lewis said.

Lewis said the suspect had been fired in a building that houses the company's human resources office, then immediately drove to the entrance of the business. Lewis said he didn't know why the man was fired.

Johnson and the suspect were hospitalized and in stable condition Friday, Lewis said.

Lewis said he does not yet know what charges will be filed, adding that police are waiting until the man is conscious to arrest him. Moore police have asked the FBI to aid in the investigation and look into the man's background because of the nature of the attack, Lewis said.

A Vaughan spokeswoman said the company was "shocked and deeply saddened" by the attack.

Those interested in following the story can read more here: "Man Accused In OK Beheading Awake."