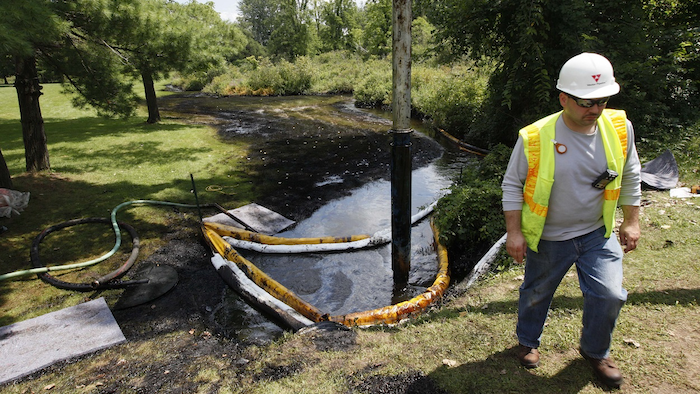 In this July 29, 2010, file photo, a worker monitors the water in Talmadge Creek in Marshall Township, Mich., near the Kalamazoo River as oil from a ruptured pipeline, owned by Enbridge Inc, is vacuumed out of the water.Image credit: AP Photo/Paul Sancya, File

A federal court deal this week ended the latest legal skirmish resulting from what the Environmental Protection Agency describes as the costliest inland oil spill in U.S. history — and one of the largest. Heavy crude from a ruptured pipe oozed into a creek feeding the Kalamazoo River in July 2010, a disaster compounded when Enbridge control center personnel in Canada misread alarms and boosted the flow. It took 17 hours for the company to realize what was happening.

Nearly 40 miles of the river, shorelines and wetlands were polluted. Cleanup lasted four years and cost Enbridge more than $1 billion. The company said 843,000 gallons of oil were released, while EPA put the total at more than 1 million.

The Calgary, Alberta-based company reached $176 million consent decree with U.S. regulators in 2016 that required inspections of additional pipelines in Enbridge's Lakehead network, a web extending some 2,000 miles across seven states. The company would use tools that could detect cracks, corrosion and other flaws inside pipes.

But EPA and a third-party monitor working with the government concluded that six inspections conducted last year did not meet the time frame under the settlement. Enbridge denied violating the agreement, saying there was an honest dispute over when the clock had started. The internal checks were finished and no safety concerns found, spokesman Michael Barnes said Thursday.

"To ensure focus on safe operation of the pipelines and to maintaining our commitments under the consent decree, we have agreed to pay a penalty to resolve the matter," Barnes said. We have reached agreement on the inspection schedule going forward."

Spokesman Wyn Hornbuckle of the U.S. Department of Justice, which represented EPA, declined to comment on the settlement, which was filed Wednesday in U.S. District Court for Western Michigan.

Two of the inspections were of sections of Line 5, which runs between Superior, Wisconsin, and Sarnia, Ontario. Neither involved a nearly 5-mile-long underwater segment in the Straits of Mackinac, the channel that connects Lakes Michigan and Huron, which received several dents from a suspected tugboat anchor strike last month and is the subject of public debate over its safety.

The settlement also noted concerns about the reliability of a tool used previously for inspecting Line 2, which runs from Edmonton, Alberta, to Superior, Wisconsin. It said the company would work with vendors to develop a model that could better detect cracks and determine their size.