The injection of the byproduct of oil and gas production deep into the earth has induced the quakes. 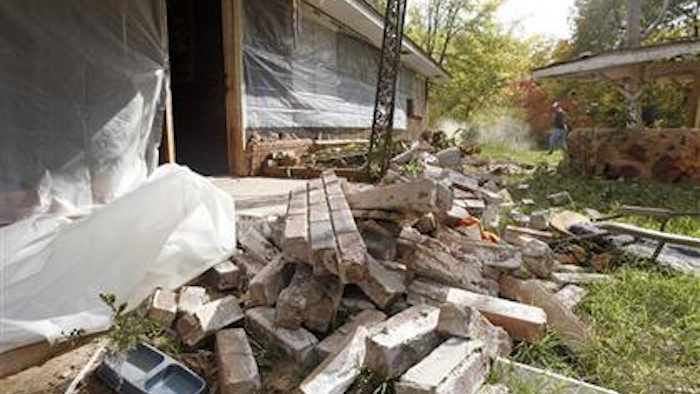 A sharp rise in earthquakes in Oklahoma in the past 100 years is likely the result of industrial activities in the energy-rich state, such as oil and natural gas production, a new study suggests.

The paper by the U.S. Geological Survey, which singled out the state of Oklahoma, was released online this week and will be published in December's Bulletin of the Seismological Society of America. It concludes that injection of massive amounts of the byproduct of oil and gas production — chemical-laced wastewater — deep into the earth has induced the quakes.

The paper dates wastewater injection methods to the 1920s in Oklahoma. The modern-day process that produces the byproduct wastewater is known as fracking, or forcing millions of gallons of water, sand and other additives deep into the ground to free up pockets of natural gas.

Both the energy industry and scientists agree that fracking doesn't directly cause significant earthquakes. Where they part ways is what role injection of the byproduct wastewater back into the deep ground plays in inducing the quakes.

"That's sort of been a red herring: 'does fracking cause earthquakes?'" said U.S. Geological Survey seismologist Susan Hough, the lead author of the study. "But that's not the point you want to argue. They were producing wastewater before (modern-day fracking)."

The research shows that between 1880 and 2008, there were about 25 quakes of 3.5-magnitude or greater in Oklahoma. From 2008-2014, there were roughly 154 of the same strength. That includes the largest recorded earthquake in state history, a 5.6 earthquake centered near the town of Prague in 2011. Some researchers have put its magnitude as high as 5.7

The study relied on Library of Congress data and drill permit records from the Oklahoma Corporation Commission to track how wastewater injection practices evolved in a state where oil production has been going on for more than a century.

The paper's suggestions were disputed Wednesday by a leading energy industry organization.

"Most induced seismic events are too small to be felt, and there has not been significant damage or injuries as a result of even the largest earthquakes potentially induced by wastewater injection," said Neal Kirby, a spokesman for the Independent Petroleum Association of America, a Washington-based group representing thousands of oil and natural gas producers.

In response to research suggesting a wastewater disposal-earthquake link, the state's Corporation Commission has developed a plan covering hundreds of disposal wells to examine if they are injecting too deep into the ground, and requiring that they not be as deep.

The agency has also implemented a volume cutback plan for areas with recently heavy quake activity, such as wells in the towns of Cushing and Crescent, commission spokesman Matt Skinner said Wednesday.