Toho's attorneys use copyright and trademark law as effectively as Godzilla uses his tail and claws to topple buildings and swat opponents. Their court injunctions have permanently whacked music, books and movies from store shelves. 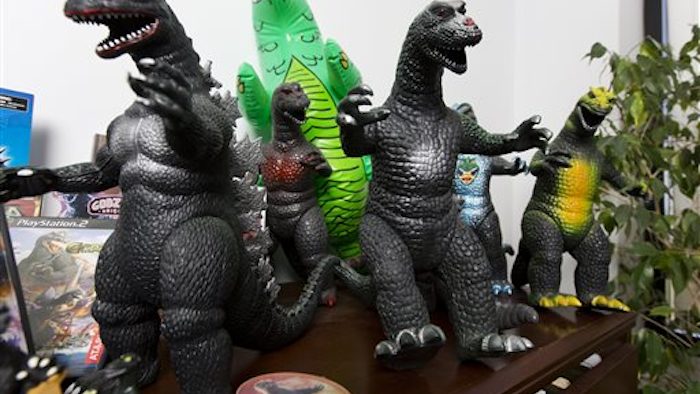 LOS ANGELES (AP) -- He spews radioactive fire, razes cities and pummels creatures from Earth and beyond, but even Godzilla needs a good lawyer sometimes. After all, you don't survive 60 years in the movie business without taking some fights to court.

For decades, attorneys acting on behalf of Godzilla's owners, Tokyo-based Toho Co. Ltd., have amassed a string of victories, fighting counterfeiters and business titans such as Comcast and Honda along the way. The opponents have come from all corners of pop culture: TV commercials, video games, rap music and even the liquor industry.

The litigation has kept Godzilla's brand thriving and helped pave the way for commercial and merchandising tie-ins that will accompany the monster's return to the big screen on Friday after a 10 year hiatus. Godzilla's image is for sale, but permission is needed.

Toho's attorneys use copyright and trademark law as effectively as Godzilla uses his tail and claws to topple buildings and swat opponents. Their court injunctions have permanently whacked music, books and movies from store shelves.

Since the mid-1980s, Chuck Shephard of the Los Angeles law firm of Greenberg Glusker has been Godzilla's lead lawyer, filing suits like the one against a wine called Cabzilla that resulted in a winemaker being forced to dump its stock of Cabernet Sauvignon down the drain.

"Godzilla is just as protected as Mickey Mouse," said Shephard in a recent interview. Toho's lucrative licensing efforts, which include endorsements, toys, comic books, video games and even official wine and sake brands, require the company to be vigilant against copycats, he said.

Since 1991, Toho's attorneys have filed at least 32 copyright and trademark lawsuits and countless warning letters, gaining court injunctions in a quarter of the cases. Most others have resulted in settlement agreements that while confidential, result in products disappearing from the marketplace.

Since the late 1990s, Shephard has worked Toho cases with attorney Aaron Moss, whose high-end Century City office is cluttered with a mix of legal filings and official and unofficial Godzilla merchandise.

Some of the spoils of court victories include a now out-of-circulation copy of rapper Pharoahe Monch's 1999 album that improperly used Godzilla's theme music and a two-foot-tall dog toy called Tuffzilla.

"Toho is not out there to extract a pound of flesh," Moss said. "They need to protect their brand."

Both attorneys said they carefully evaluate when to file lawsuits, and Toho trusts their judgment. Litigation often starts with a cease-and-desist letter, and a company's reaction to it often determines whether the case escalates, they said.

"When you have something as famous as Barbie or as Godzilla, you're well-served to protect that," said Larry Iser, a partner at the Santa Monica, California-based firm Kinsella Weitzman Iser Kump & Aldisert.

Iser represents toy maker Mattel and noted that trademarks for some popular products such as the trampoline and escalator have fallen into the public domain, making them easier and cheaper for companies to copy.

But Godzilla's trademarks could last forever if they're properly handled, Iser said.

Godzilla debuted in Japan in the 1954 hit film "Gojira" but has proven to be just as popular in the United States. That's made him an attractive spokesmonster.

Godzilla's appearance in the 1991 Rose Parade sparked Toho's first court fight with Honda. Decked out in a tuxedo and top hat, American Honda's float was engineered to make it look like Godzilla was traipsing down the street.

The next day, Toho called Shephard. Godzilla's image hadn't been licensed for the float, and the ensuing lawsuit lasted more than a year before Godzilla finally prevailed. Honda denied that their float depicted Godzilla, despite advertisements and a memo about the float describing the creature by name.

It was one of many cases that featured what Moss calls "the dinosaur defense."

Defendants sometimes claim their products aren't Godzilla, but simply dinosaurs. It's a dubious argument, Moss said, because the products often feature a spiky spine similar to Godzilla's, or depict the creature in a cityscape. Godzilla may munch on cities, but dinosaurs didn't.

"It just doesn't work," Moss said. "Why does it breathe fire and stomp on cities?"

Godzilla has suffered one notable loss. In 1981 — before Shephard's firm was involved — a federal appeals court dismissed a lawsuit by Toho against Sears Roebuck & Co. filed over a line of trash bags the retailer had named "Bagzilla." The bag's use of a Godzilla-esque creature represented a "humorous caricature" and not a serious threat to Toho's business interests, the court ruled.

One ongoing fight for Godzilla's lawyers is against a Louisiana brewery, which is being sued over its Mechahopzilla beer line. The giant metal lizard on the beer's cans and tap handles is too similar to Godzilla's mechanical version, Mechagodzilla, Toho's lawyers argue. The brewery contends its beer is a parody and is relying in part on the Sears case.